A crappy-ass afternoon of sleet in what should be a nice spring afternoon was made significantly better by a matinee of Complexions Contemporary Ballet at Music Hall. Founded by Dwight Roden and Desmond Richardson, formerly of Alvin Ailey, the show was a mind-boggling exhibition of strength, grace, and constant, intricate movement that was almost overwhelming to watch because there was so much going on at once. As soon as I had a moment to be astonished at something, there were 17 more things going on to continue to swoop you right up.  I've never sat in the front row for anything before either, so to be that close to the dancers actually took me aback a bit when they started, because it was almost too personal to hear them breathing and see everything that close up but definitely gave me a much different appreciation of every single detail. 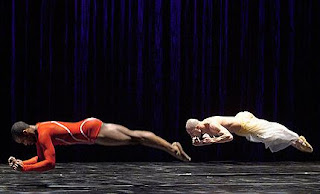 The show was done in 3 acts. The first, "Mercy" was choreographed to a wide variety of gospel, chants, and church-inspired music. The dancing communicated the rapture, emotion and worship with so much passion and complete commitment to the pieces. There were a handful of moves that were repeated and woven throughout the different songs and certainly helped to keep the thread consistent throughout the piece.

The second, included 4 pieces that all seemed to be more partner-type dances, some with a bit of a more fun, sensual edge to them. "Moody Booty Blues" had a great back and forth play between the dancers which was fun to watch (and yes, I'm proud to say that I've used to word "booty" 2 posts in a row).

The third, "Rise" was sent entirely to the music of U2, and I had leaned over to my sister somewhere in the middle of "Elevation" that I was going to go home and watch my Vertigo concert DVD. And as much as I give my kudos to the stage presence of Bono and the boys, the very beginning of "Where the Streets Have No Name" where all the dancers literally looked like they were running at top speed on a treadmill (with far more grace than I've ever exhibited on a treadmill that's fo sho) took the cake as one of the more beautiful things I've seen on stage in a while (and Bono qualifes as beautiful too in my book). This piece seemed a bit short compared to the others, but I'm willing to admit that it might have been my bias to want to hear more U2 music. 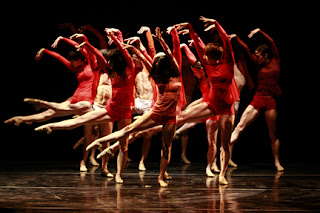 The one thing that was a big bummer about the show was the crowd. I actually felt a bit ashamed that there were so few people there and the dancers who were working their asses off had to look out into an audience with so many empty chairs. It's kind of disappointing that we holler when arts are cut but then so few are out there actually supporting it.

I'm so very glad I was able to see this. Thanks Suz, Brian and Cynthia for talking me into it. For those of you who have more physical coordination than me (uhh...all of you?) and want to explore your contemporary dance prowess, Complexions is holding a summer intensive dance workshop here in Detroit July 24-29. See you all there (HA!).
Posted up by Sloan EZ on 3.4.11