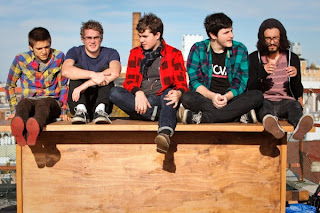 Surfer Blood is coming to Detwat - email motorcityblog@earthlink.net for your shot at a pair of passes to the show

Surfer Blood will be hitting Detroit May 4th at the Magic Stick.

Though South Florida doesn't have the tides to shoot the curl, West Palm Beach's Surfer Blood fuse sunny surf rock charm with indie rock cool. Guitarist/vocalist John Paul Pitts and drummer Tyler Schwarz had known each other since high school; they started playing together and connected with guitarist Thomas Fekete, bassist Brian Black, and percussionist Marcos Marchesani at an Ultra Music Festival after-party, officially becoming Surfer Blood in spring 2009. They began recording and touring almost immediately, laying down tracks in Pitts' apartment and embarking on four tours in their first five months together. The buzz around the band began in late August after Surfer Blood played a show at the Brooklyn venue Bruar Falls; when they returned to New York that fall for the CMJ Music Marathon, they played ten shows. Tours with Art Brut andJapandroids kept Surfer Blood busy for the rest of 2009, and their debut album, Astro Coast, was released in early 2010.

get to this show!
http://www.majesticdetroit.com/
Posted up by DIETROIT on 25.4.11