Zola Jesus played at The Magic Stick on Monday, April 18th. Opening for her was Cult of Youth, and Frustrations.

This show was billed as happening at The Magic Stick Lounge, which is the other stage that they set up on the side of the room that has some furniture set out. Instead the show happened on the main stage of The Magic Stick, they just dragged over the furniture to give it a "loungey" feel. The crowd that night seemed to be on the younger side. I don't mean that they were minors who needed a ride from their mother or anything, but I must have been the fourth oldest person there that night, and I'm really not old. I guess the age thing could have been worse, like that time I saw Tegan and Sara perform at St. Andrew's Hall.

Cult of Youth are kind of an experimental folk band, and I just really wasn't feeling it. The singer is an American who tries to sing in a sort of Irish accent. Kind of like those bands we have to hear on the jukebox whenever we go to the bar on St. Patrick's Day. 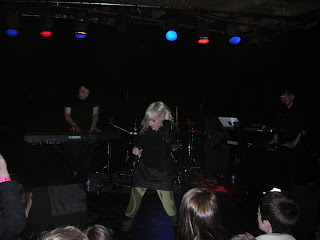 Zola Jesus has a sound that uses a lot of synthesizers, and I thought that she would have to use some prerecorded stuff for her live show. This was not the case, because her band has three people playing five synthesizers in order to give the audience everything you hear on her albums. My other concern was that her voice might not withstand the rigors of touring. She has a really great voice that belts out strong emotions, and adds a lot of power to the song's crescendos. I don't know if we caught her near the beginning of her tour, or if her vocal chords are just always resilient, but she was spot on.

The crowd might have only been slightly over 100 people there, but when Zola Jesus went on stage, they all scrambled to get as close as they could to the front. 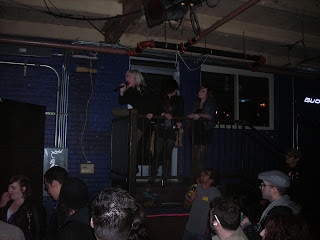 The way the band set up their instruments left Zola a lot of room at the center of the stage, and she didn't quite seem to know what to do with it. Sometimes she would pace back and forth as she was singing. Overall she just always came off as nervous when you watched her, but you wouldn't have known that if you closed your eyes and just focused on the audio. Towards the end of her set, she got off stage and ran amongst the crowd. She even got up to the top of the stair leading to the roof deck.

When her set ended, the 100 people there that night clamored as best they could for an encore. If a crowd would be that loud in unison when it's a full house at the Stick, it would be deafening. Zola came out to do one more song, and the crowd was just as demanding for her to come back out for a second encore.

I know it was a Monday night and all, but if you missed this show, it sucks to be you.
Posted up by Detroit Area Dork on 20.4.11