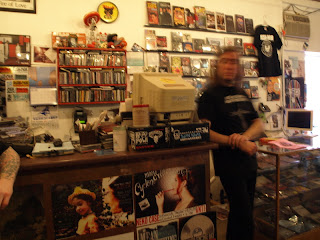 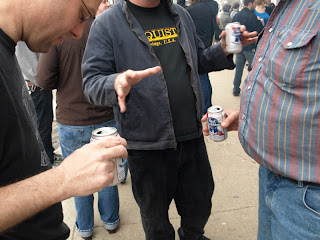 Started the Wisconsin indie Record Store Day at The Exclusive company-Greenfield location.  Arrived at a very balmy and cold 7:05 am only to be 10th in line. As the minutes ticked away, more true music fans and sleazy eBay sellers were arriving. The guy behind me arrived 10 minutes after, announcing "it's Christmas day, you record freaks".  The doors promptly opened at 8 am and the pushing and shoving began. What were people grabbing up so quickly?  The Beach Boys, Nirvana, Foo Fighters, Beady Eye and The Yardbirds.  One puzzler was the Daft Punk single- people were grabbing them in multiples.  I didn't know Milwaukee had that many Daft Punk fans (or Tron).  One of the clerks announced several times they did NOT have the White Stripes singles.  As I was scoring the Guided By Voices vinyl tribute, the guy next to me grabbed all four copies of the Mastodon picture disk. They had two notable performances for the day; Del McCoury with the Preservation Hall Jazz Band and Mike Watt. With my RSD swag bag and great scores of the day, I headed to Rush-Mor Records. This is a great store with an awesome staff.  There was no fan fare; you just had to inquire about what you were looking for.  Picked up a Light in the Attic compilation lp and the new Earth lp.  At Rush-Mor, it was calm, people talking about music, drinking beer, and great tunes coming over the speakers, just how everyday at a record store should be.

Reporting from Milwaukee for MCB