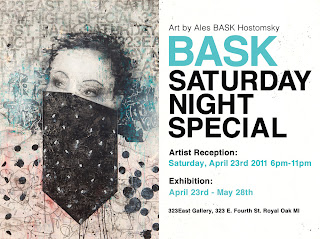 There will be a special overture to the festivities starting April 19. That day BASK will commence a mural on the Royal Oak gallery's exterior walls - an ambitious work he'll continue to labor on until the exhibit's official unveiling on the 23rd.

Continuing with the week long festivities BASK is releasing his second art print on 323East's sister site 1xRUN. The featured image from Saturday Night Special will be recreated in a multi color silkscreen print. This limited edition, signed and numbered print will be available for 1 week starting at Noon EST on April 18th - April at http://1xRUN.com. In this image the woman is casually framed by ghostlike mechanical engines and an ambiguous ocean of objects swirls beneath her eyes - the latter element resembling the schema of a computer's mainframe as delineated by things suspiciously similar to spermatazoa. Is the mask meant to conceal identity or does it hide the marks of some past crime?

Bask is that rarity in the contemporary art world - a serious commentator on social issues and problems who draws upon personal experiences and insights rather than theory. Equally inspired by graffiti, the punk scene's D.I.Y. use-what-ya-got ethos, and the parallels he sees between the stark propaganda of his Eastern European childhood and contemporary American pop culture with all its overt manipulations, his works are gritty and thematically rich. Encompassed in the original slogan that first caught the imagination of critics and public - "Bask in your thought crime" - his philosophy is one of freedom and individuality, rather than the exacerbation of blind nihilism. He sees myriad possibilities in a discarded piece of wood, in a whitewashed brick wall, or in the emotions that arise when familiar shadows loom behind bright, shining lies.

His eyes are open -as is his mind. His art encourages us to embrace the same practices.

Bask's imagery has been shown in New York, London, San Francisco, Miami, and Detroit, and is a part of the Jacksonville Museum of Contemporary Art's permanent collection. His work has also been published in countless publications including books like, Graffiti World, New American Paintings, BLK/MARKT ONE, and the upcoming 3D Art Book.
For more information on BASK, go to www.KnownAsBask.com