Andre Williams and his New Suit(s) by DC-in-Detroit

DC is a longtime contributor to the MCB

She can be reached at DC.in.Detroit [at] gmail.com


First of all let me say, a month into it, I am really enjoying the smoking ban. I hate to admit it because I am not a fan of nanny state laws. But as a non-smoker, it's really made my nights out more pleasant. Not to mention my morning-afters—nice to wake up suffering primarily from self-inflicted liquid poisons without the additional passive airborne varieties.

In addition to the pesky little business of the erosion of our personal freedoms, here's the other thing that concerns me about the smoking ban: I fear it's going to make our Michigan citizenry even fatter than we already are. All of our bars have kitchens now. And since no one is smoking, everyone is eating. And I mean everyone.

I made my first trip to the renovated Alvins on Saturday, 19 June, and when I got there at 10pm, the first thing I noticed was... everyone was eating. I had already had a deliciously overfilling of tortellini a couple of hours earlier, but the deep-fried air almost overtook me. I resisted... this time. But next time, the $1.50 fried twinkie is going to happen.

My tablemates did wind up ordering chili, salad, fried shrimp and Polish sausage. I can only attest to the Coney-style goodness of the chili, but ultimately there wasn't a scrap left on the table, so I'm going to go ahead and grade it all "double-plus edible."

Open for less than a year now, this was not at all the Alvins I remember from... whatever past decade it was I last darkened its doorway. That Alvins always seemed a bit closed in. This Alvins is open and roomy. Most importantly, the sound quality was really stellar. The separation was clear, and the volume just right. I was impressed.

I had seen Andre Williams a couple of months ago at the Park Bar on Park next to Cliff Bell's (don't even get me started on finding the Park Bar... I'm still annoyed by that), a gig he played with locals the Party Stompers. The band he came with this time, I came to find out, was a conglomeration of two different Chicago-based bands, brought together to tour with Williams (more on that later). When they came out to warm us up with some instrumentalizin', I liked them a lot, immediately.

For starters, damn, call me! Any one of you, seriously. A fine fine-looking crew. Although I admit, I'm a sucker for a skinny tie (more on that later). I could have listened to them all night—and thanks to keyboardist Skip, I sorta can.

After our intimate introductory interlude, the legendary Mr Williams strutted on to the scene, resplendent (as always) in his first three-piece of the night. It was just about midnight when he got started—any earlier would frankly seem unwholesome—and the crowd was as strong as it was gonna get at about 40 souls. The good news about the light turnout is that these people were really there for Andre. They didn't need to stand up, up front near the stage, but they did. The booty-shaking was joyful, dog love 'em.

"I truly appreciate you all coming out to see us tonight," Andre said to his crowd, "all you Detroit poor people —" the adorably middle-class crowd blinked for a moment "— well, you ain't WORKIN'!" Andre declared. And all were one, whether we'd just come in off the bus or off our boats.

Andre Williams sings some of the raunchiest songs ever written. Although he's been recording for forever, I have a really difficult time imagining him singing such delightful ditties as "Let Me Put It In" 50  years ago. (Yes, it's a love ballad.) But somehow, there's something about this being belted out by a 104-year-old man that just makes it... charming.

Another of my favorite Moments in Raunch™ of the evening began with Andre explaining, "Me and the boys in the band have mixed feelings about this song..." and then handing it off to "the boys" for the uplifting "Pussy Stank" (but so do marijuana). I can see why they'd have mixed feelings.

After about 50 minutes (and two costume changes), Andre left the stage, but returned to reward the faithful with the favorite "Jailbait." That's how you leave' em.

I'm not much for autograph-hounding (well, not since I completed my 1983 Tigers yearbook), but when Andre and the band hit the floor, this was something I couldn't pass by. There were a few posters for the show scattered around the room, so I grabbed one and got the man to sign it for me—personalized "to my gal." Awww! Then I set about getting the rest of the band to sign, since I was so taken by them. You know, musically.

The man in the trillby behind the Korg had some CDs for sale of the band he and the bassist are usually in, the Goldstars. I confessed I'd already spent all my money on rum, otherwise I'd have bought one for sure—if this was the irregular band, I'd have loved to hear the regular. I got him to sign the flyer, and when he asked my name (I guess "gal" just isn't good enough for Skipper), he said, "Oh, you were on the list tonight." Why, yes, being on Official MOTORCITYBLOG Business opens some door lists. I told him I'd be running a write-up of the night's show. "Hi, DC!" he wrote, "write something nice!"

I couldn't swipe Andre's pen, so I scurried back over to the bar to see if I could swipe one there, and found myself standing next to drummer and cutie extraordinaire, Alex Gourse. Oh yay hello sign this! That's when I got the skinny on the other other band, The Stranger, which occupies our friendly drummer as well as Jason Larsen on guitar. Did I mention how cute guitarist Jason was? I did? Okay, did I mention what a killer guitarist he is? Yeah? That's covered then.

I had one more autograph to get, the very animated bassist and other Goldstar, Sal. With a bold "I [heart] Detroit!" I'd gotten 'em all. That left me free to resume my place amidst The Stranger and spend my actual last $5 on more rum.

We were joined by the other two fellas, Skip with a copy of the Goldstars' "Gotta Get Out!" in hand. Evaluation copy ahoy! I'll say this much: It's great driving music.

"Well... not much. I've got... a tie..." I just happened to be wearing a Brocade Lion original embroidered tie — this one: 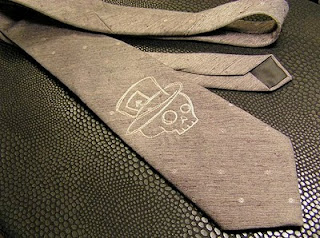 Jason jumped in. "I like ties, let me see that."

I suggested a straight tie swap; I removed mine and he stripped his. (dirty) He told me the love story about when he and Classic Skinny Red met-cute at a vintage Chicago shop. "And here's where I spilled red wine on it... and here's where the sweat starts..." he said sheepishly.

"Okay, well, this tie," I flourished, "is a custom-embroidered one of a kind. It's got my tag on the back, so you can always get in touch with me there." The eyebrow waggle was entirely involuntary, I swear.

The deal was struck. Jason got the grey and pink Ace of Spades. I got a sopping wet American-made Arrow, soaked with enough sweat to clone another guitarist.


Photos by Jennifer Jeffrey for MCB.