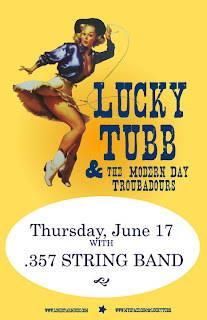 Lucky Tubb has taken it upon himself to preserve his family’s musical heritage and does so with reverence and pride. Nephew of the country great, Ernest Tubb, his songs here shine like sequins on a vintage Nudie suit (early Porter and pre-Gram), and Lucky stakes vocal claim to the sound created by his elders, a sound as genuine and heartfelt as those written over 50 years ago.
The Modern Day Troubadours play with Freshness and urgency. Moaning steel guitar, lonesome mandolin, and sad sweeping fiddle lines that make a sound not unlike a is a black and white photograph that you can still see (and hear) with your eyes closed. The tunes are timeless and sound familiar, yet new, coming off as fresh and flavorful as southern fried chicken. These troublesome songs of love lost, heartache, and heartbreak make music that is rough cut, and bootleg-distilled full of tears of yesterday’s broken hearts, and held together by the authority of a loaded glove compartment pistol. Lucky seems to have his finger firmly on the trigger. Buy him a drink. He’s got a long story to tell.

Anything but derivative, The .357 String Band pays homage to both the dark roots of Americana - the fatalistic murder ballads, sneering Outlaw Country and unforgiving Gospel - as well as their own background coming of age in Milwaukee’s Punk and Rockabilly scenes. The result is a faster, meaner folk music - something the band calls “Streetgrass.”

Forgoing drums and using only stringed instruments (and the occasional megaphone), The .357 String Band plays with all the fire and fury of Rock & Roll; with an often surprising musical and lyrical refinement. Replete with mythology and mysticism, religious imagery and Biblical reference, The .357 String Band’s music ultimately engages with life here on Earth - the struggle of human beings to reconcile conflicting impulses and emotions is at the core of their music. With lyrics that can be as dark as the human soul at its worst, the music can’t be called negative - rather, it serves as a grim-yet-hopeful reminder that only by fully embracing the demons inside each of us can we exorcise them.

Detroit's Petal Shop opens
Posted up by DIETROIT on 16.6.10