I've completely nerded out about these guys before, so I'll try to spare you... a little. Not to be overly-hyperbolic, but years of my life have led to this moment. 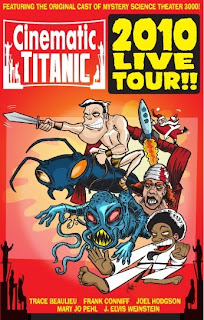 Cinematic Titanic Live is the theatrical version of movie riffing, the comedic art form we created over twenty years ago in the form of Mystery Science Theater 3000.

Performed in a theater, the five cast members take the stage and riff on a feature film in front of a live audience. Lately Cinematic Titanic has taken over some of the most beautiful theaters in the country with some of the cheesiest movies ever made, making for a hilarious evening of entertainment.

After each show, we’re fortunate enough to meet Mysties as well as new devotees of Cinematic Titanic. Just a note: We will sign pretty much anything with a smooth surface.

Our tours have already taken us to San Francisco, Dallas, Minneapolis, St. Louis, Chicago, Cleveland, Boston, Austin, Atlanta, Phoenix, Portland, Seattle, and Philadelphia! Check here for current shows, and we hope to come soon to a theater near you!

Laugh along with the non-stop riffing on some of the absolute cheesiest movies ever made as the original cast and creators of MST3K flank the jumbo screen at the Michigan Theater for a live stage show.
Cinematic Titanic is the feature-length movie riffing show from the creator and original cast of Mystery Science Theater 3000. Like the television series, the live stage show features the same team that first brought the cult-classic series to life: MST3K creators Joel Hodgson, Trace Beaulieu (Crow, Dr. Forrester); J. Elvis Weinstein (Tom Servo, Dr. Erhardt); Frank Conniff (TV’s Frank) and Mary Jo Pehl (Pearl Forrester).
Enjoy the screenings of East Meets Watts (7:30 pm) and the oldie but baddie The Oozing Skull (10:00 pm).
Posted up by DC in Detroit on 17.6.10