MCB has been promoting Satori Circus for 1/10 of his years running the stages
If you haven't been witness to any of his numerous shows
what the hello are you waiting for?
get out and support detroit theatre!
email us if you want a set of tickets for free
motorcityblog@earthlink.net
your entry must include the sob story about how you can't scrape the scratch
to support this unique and entertaining stage act 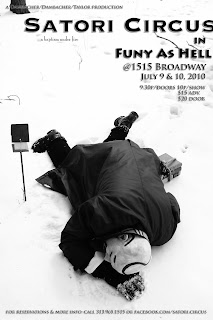 SATORI CIRCUS PRESENTS
THE RETURN OF "FUNY AS HELL"
FOR TWO NIGHTS ONLY!!

from the desk of SATORI CIRCUS
On July 9th and 10th, 2010, SATORI CIRCUS and Brian and Dave Dambacher are back….AGAIN!! And yes, they are bringing along with them the performance art piece that made them famous last year at at Yale University in New Haven Connecticut and the year before at MeadowBrook/Oakland University…titled, 'FUNY AS HELL: a baptism under fire'! (Funy actually pronounced, Funny.)
This time SATORI CIRCUS and the Dambacher Brothers, have another opportunity of reinterpreting their very own creation, without slighting the audience who loved the first presentation of 'Funy As Hell'.
Using Dante's The Divine Comedy as the framework you are guided through a labyrinth of questions, of spirit, of destiny, of hope, of despair, and pure naughtiness: all the same musings. You witness the travels of a man who is lost in a dream between the here and there of Purgatory, Hell and : the same premise. Combining music, song, costumes, sound & lights, movement, film, cabaret and enlightenment your perception is obscured as to what performance art is, or what it could be…and yes, these are all the same contraptions used to embellish a story.
Blurring what is typically thought of as theatre, SATORI CIRCUS and the Dambachers will bring the audience through the subterranean worlds of Purgatory, Hell and Paradise to witness, participate in and analyze the situations that our protagonist, our hero (or anti-hero), manages to become involved with…deliberately or accidentally.
Be prepared for the unknown and come with an open heart and head to witness a performance art hybrid rarely seen in this Detroit Metro Area. We guarantee that you have never seen anything like this. You may never again. And you'll leave humming and wondering if hell could really be this entertaining. And as Dante said at the gates of hell, "Abandon every hope, all ye who enter here."
July 9th (Fri.) & 10th (Sat.)…ONLY TWO Performances
Doors open at 9:30p with performances beginning at 10p
Tickets $15 in advance and $20 at the door 1515 Broadway Theatre in Detroit