THIS WKEND: 2001 A SPACE ODYSSEY at the Redford Theatre

I love this movie. I really love this movie. Even still, I confess, it took me several viewings before I was able to watch it straight-through without the hauntingly gorgeous, but wholly soporific, soundtrack triggering my narcolepsy and landing me face-down on the carpet.

It was worth it. Every time.

I'm an unabashed fan of Kubrick, and so are you — if you've ever loved a movie, so are you. This is a new opportunity, though, to see the genre-changing film in 70mm format.

As an added bonus... Pipe organ!

Friday 25 June
Saturday 26 June
The Redford Theatre
17360 Lahser Road
Detroit, MI 48219
Friday, June 25, and Saturday, June 26, the Redford Theatre presents 2001: A Space Odyssey (70mm print, 1968) starring Gary Lockwood and Keir Dullea, directed by Stanley Kubrick (Oscar for Best Special Visual Effects). Friday's screening is at 8 pm, and there will be two showings on Saturday at 2 pm and 8 pm. All tickets are general admission, and cost is $6.00 which includes free parking. The Redford Theatre is located at the NE corner of Grand River Ave. and Lahser Rd. in the heart of Detroit's Old Redford neighborhood. 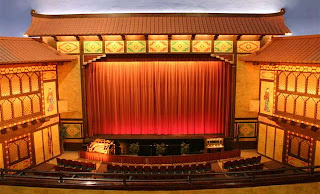 Patrons get much more than a great movie experience on the Redford's silver screen. This week will feature the Redford's original theatre pipe organ and piano music, followed the magnificence of 70mm-where the enormity of the screen puts you in the picture. Twinkling stars in the auditorium ceiling complete the space odyssey effect!

Live Music: Welcoming tunes from the lobby piano set the mood when the box office and doors open 1 hour before showtime. The the spotlight then shifts to the auditorium where the Star Spangled Banner with a majesty of a stage-size American flag are followed by a half-hour of lively music on the Theatre's Barton Theatre pipe organ.

Now, imagine watching THIS on the Redford's big screen.
Posted up by DC in Detroit on 23.6.10