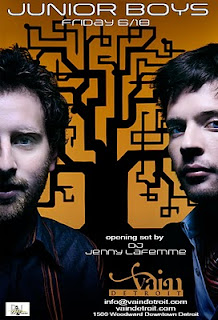 Their music has drawn variously from disco, electro-pop, UK garage, R&B—and Frank Sinatra. They bear traces of Munich, London, Chicago, Virginia Beach, Tin Pan Alley—and yet they hail from Hamilton, Ontario. They are men of the world, but you can call them Junior Boys.
The men in question, of course, are Jeremy Greenspan and Matt Didemus, and their story is an unlikely one: two childhood friends who had no real intention of becoming professional musicians—and yet, six years after the almost accidental founding of the band, find themselves with three studio albums and a mix CD under their belts, their passports ragged after frequent touring, their press books brimming with clippings.
Opening Set by DJ Jenny LaFemme
Discounted Tickets at www.wantickets.com/vain
VAIN
1500 Woodward Ave
DETROIT
Posted up by RebeccaMich on 18.6.10