Enter to win a pair of tickets to the show
AND
the 7" vinyl featuring Jack White
motorcityblog@earthlink.net 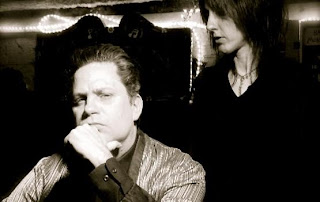 Twenty years on from the FLAT DUO JETS, who created the template for stripped down rock and roll that’s been copped by the White Stripes and a thousand far less clever bands, Dex Romweber has teamed up with his sister Sara (Let’s Active, Snatches of Pink) for the first time on the debut album by the Duo, Ruins of Berlin.

Dex’s guitar conjures the primal ghosts that live in the scratchy grooves of 45s that snake through our collective musical DNA; some are well known, most long forgotten, but no one can draw the line between Link Wray and Marlene Dietrich and have it make sense like Dex. And when he sings, you get the sense, sometimes uneasy, that here is a man that HAS to sing, has to let it out, or all the pain, longing and triumph of the heroes and hep cats and sinners and losers he sings about will tear him apart from the inside.
With Sara’s mammoth drumming as the spine, the Duo go well beyond any mindless retro tag; they absorb the essence of their idols before erupting with re-inventions that are both primitive and elegant.

Joining the Duo is a dazzling array of admirers that brings true STAR POWER to Ruins of Berlin. Dueting with Dex are indie rock chanteuses Cat Power (“Love Letters”) and Neko Case (“Still Around”), as well as punk icon Exene Cervenka (X) (“Lonesome Train”). Longtime Romweber accomplice Rick Miller (Southern Culture on the Skids) teams up with Dex on “Lookout,” egging on the Duo to new heights of surf-rock derring-do.