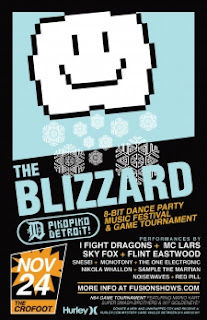 There's no call for snow this Saturday, but the temps will be falling and inside the Crofoot there's going to a blizzard. But it won't be a blizzard of that cold nasty stuff that falls from the sky, it will be a bliizzard of bleeps. flashing lights, 8-bit breaks and video game hysteria as I Fight Dragons, MC Lars and the great folks of PikoPiko Detroit present The Blizzard music festival. Over ten acts, including several local 8-bit music makers and indie dance pop band Flint Eastwood, will turn the Crofoot into an interactive video game concert where all in attendance will have their very own dance, dance revolution!

I had the chance to check out I Fight Dragons last time they came to town and here is a video I did with the guys: