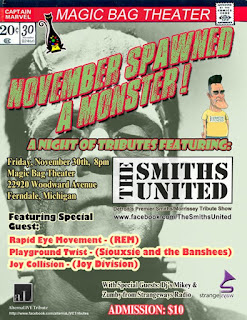 The Smiths United have paying tribute to the Smiths and Morrissey for the past couple years and over 20 shows that bring together fervent Smiths followers and casual 80’s music fans to dance until their hearts are content. This Friday is another Smiths United show, but not just another show, because they are all special.  This one, November Spawned A Monster,  is a tribute festival with local bands paying tribute to REM, Siouxie and the Banshees and a new late add to the show.

Christopher George, lead singer of the Smiths United and the impetus for the show, spent a few minutes with me last week explaining the whys and whatfors behind the show:

MCB: Where did the idea for this week’s show come from?
CG: I wanted to something similar to the old days of Lollapalooza when great bands like Janes Addiction and all the bands we liked used to play. It’s too cold to do something outside this time of year, so my idea was a multi-band festival with all tribute bands. It’s been a very interesting ride so far.

MCB: How did you locate the bands for the show?
CG: The guys in the REM band (Rapid Eye Movement) got a hold of me through Chris Henderson, their guitar player who is friends with our guitar player. They just got their band together and wanted to play some shows so I checked them out and that started this whole idea. Dave Johnson who plays guitar in the Blueflowers mentioned to me he was in a Siouxie and the Banshees tribute (Playground Twist), so it all fell in line.

MCB: And one more tribute band?
CG: Well we were going to have a Joy Division tribute, but that fell through. Then there was going to be a Sex Pistols tribute but that didn’t work out either. Now we have a duo called Thumbs Up playing and they are a Velvet Underground tribute.

MCB: Well that’s cool because Velvet Underground are kind of responsible for a lot of alternative music we heard in the 80’s.
CG: Yes, and it works out for what I was going for the night, a chronological order of bands and when they came out.

MCB: With your Smiths United set do you have any new songs?
CG: Yes, we have 4 or 5 new songs in the set and we brought back a few we haven’t played in a while. The ones people keep asking why we weren’t doing anymore (laughs). It’s going to be a different set, a little more diverse and a little more Morrissey.

MCB: And you have a new bass player?
CG: Yup, third one! This one is a friend of mine, Max, who has played with me before so it’s nice to have somebody I know in the band.

MCB: What time does the show start?
CG: Doors are at 8pm and the first band will start at 9pm, there’s a lot of music to fit into one night and we’ll just keep trucking right through it.

The Smiths United with Rapid Eye Movement, Playground Twist and Thumbs Up is Friday at the Magic Bag, tickets are $10.