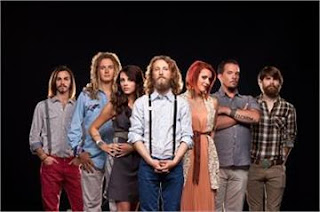 
Gulfport, Mississippi's Rosco Bandana have released their debut album Time To Begin on Hard Rock Records this fall and they're heading out on the road for their December tour with Reverend Peyton’s Big Damn Band. They'll be making a stop at The Magic Bag in Ferndale this Sunday 12/02 along the way.

In 2011, the seven-piece band entered Hard Rock's international 'Hard Rock Rising: Global Battle of the Bands' competition and won among 12,000 entered bands. The band became the first group signed to Hard Rock Records. After winning the competition the group flew out to Los Angeles where they recorded their Americana inspired debut LP with producer Greg Collins (U2, Red Hot Chili Peppers, No Doubt).