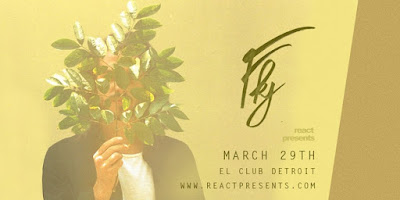 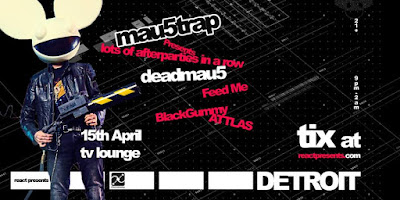 NOT TO BE MISSED!
Check out Deadmau5 in a club setting before his headlining spot at
Movement 2017 under his techno alias, "Testpilot" 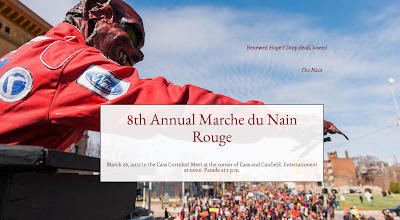 It's the time of year when the city swells with pride and hits Cass Avenue to meet its oldest nemesis, the legendary harbinger of doom, the Nain Rouge.

The annual Marche du Nain Rouge returns for its 8th year, with festivities and entertainment starting at noon March 26, 2017, at the corner of Cass and Canfield in Midtown. The parade will depart at 1 p.m. down Cass Avenue to the Masonic Temple.

At the Masonic Temple, marchers will meet the Nain, if he once again decides to show his face. In past years he’s ridden on a giant cockroach, tamed a fire-breathing dragon, run for mayor, among other shenanigans. The Nain has been met by young Detroiters in love, Ghostbusters, and spirits of Detroit’s past and future. What will he try this year? And more importantly, how will you face the Nain?

This year, Mardi-Gras-style Krewes du Rouge are forming to show the Nain their neighborhood pride. Two krewe parties are planned: March 16 for East Siders at 8 p.m. at Cadieux Cafe, and March 23 for Midtowners at 8 p.m. at Traffic Jam & Snug. The parties feature live music, food, drinks, and fun appearances -- perhaps the Nain will even attempt to crash. It’s a weakly constructed mystery!

Several bike groups are planning to decorate their wheels and roll down Cass together, featuring the wonderful animal creations of Detroit-based metalsmith, Juan Martinez. A recent workshop of the Wire Auto Workers Association of Detroit (WAWAD) will bring out hand-crafted, human-powered wire cars.

Also this year, the cockroach from 2016 will be joined by several other Art Cars, including a new “Bubblemobile” out of Southwest Detroit, and Scrubby Bubble, which has represented Detroit at the Annual Burning Man Festival in Nevada. Plus, Caribbean Mardi Gras Productions will return with feathery floats and giant sparkly costumes ready to accompany their Pans of Joy steel drum band. And our friends at Gabriel Brass Band will return to lead the Marche with their authentic New Orleans second-line sound.

Adding to the spectacle, the Marche du Nain Rouge is inviting all cosplayers and costume-lovers to put on their best capes and wigs and join the fun. Prizes will be offered at the after-party festivities inside the Masonic for the best cosplayer/costume and neighborhood float. There will also be entertainment from DJs, dancing food, drink, official merchandise, a kids zone, and more.

To get Detroiters in the right spirit to meet the Nain, businesses are taking part in Fete du Nain with a full week of merriment and good city vibes. Check www.marchedunainrouge.com and our Facebook page for  participating businesses.

More than 6,000 people attended last year’s parade, compared with 300 who came to the first parade!

Revelers are encouraged to come in costume. The event is free and open to the public.

Parking will be available on the street, and for $7.50 at nearby Wayne State University lots and structures (Lots 60 and 72 and Structure 8). Visa and Mastercard are accepted.

In 1701, legendary founder of Detroit Antoine de la Mothe Cadillac met a fortune-teller, who warned him to beware of the Nain Rouge, the “Red Dwarf” who appeared to Cadillac in a dream. She warned Cadillac that the the little red imp is the embodiment of his ambition, anger, pride, envy — everything that held him back. The Nain Rouge, she told him, is the harbinger of doom. However, when Cadillac first saw the fiend in person, the Nain taunted him mercilessly and Cadillac chased the Nain away with a stick.

Unfortunately, the fortune turned out to be true and Cadillac died penniless after he left Detroit for France. The city he founded, however, fared better, endured and prospered (mostly), against the fiendish efforts of the Nain Rouge.

For 300 years, Detroiters memorialized Cadillac’s actions and willingness to persevere and hope for better things, combined with the determination to rise from the ashes. At Detroit’s worst moments, the Nain has been there, cackling or taunting the city’s residents. And so every year, Detroiters celebrate liberation from the Nain, a new beginning, and whatever is good and working in the city in a spring festival for the good and betterment of the city of Detroit.

BUT LET'S NOT FORGET

The jury may still be out on the little guy. A small but growing movement has arisen to play Nain's Advocate on the red side. 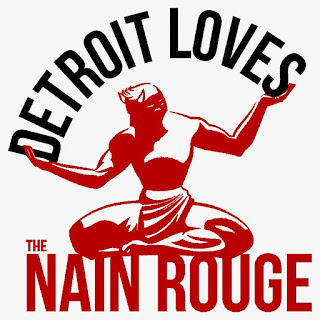 A band of contrarians — an attitude dear to the heart of any Detroiter — are leading the charge to reclaim the Nain and STOP NAIN SHAME.

The 4th Annual Hamtramck Music Festival took place on March 2-4, 2017.
(I wasn't at the opening night for its limited offerings on Thursday) 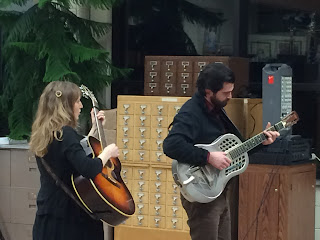 I'm grateful for the early evening offerings at places like Cafe 1923, Bank Suey, and the Hamtramck Public Library. Even though there wasn't much else to choose from at the time, I would've made it to see Lac La Belle no matter where they fell on the schedule. Their American folk sound at the library didn't need a lot of amplification, and it sounded great. I stuck around for Panch Villa Skull afterwards. 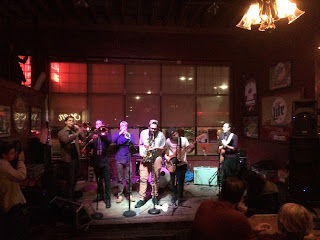 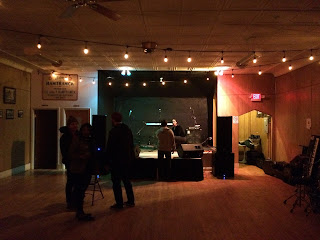 Vespre was the first band scheduled to play PLAV Post 10, and they still hadn't started twelve minutes after they were scheduled to, thus causing me to lose interest and go elsewhere. 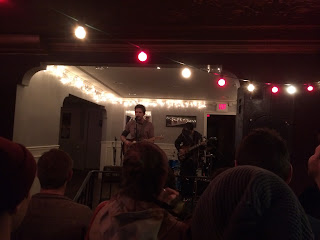 At Polka Dot, the former Atlas Bar, Remnose made a better impression. Their softer sound made it easier to focus on their lyrics. It's clear they put a lot of thought into them, as they don't fall back on using the word "like" every other line. 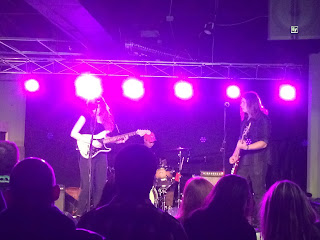 The corner of Yeman and Joseph Campua must be a tough spot to keep a bar open at. Mars Bar became Temptation Louge, which has now become Hamtramck Korner Bar. What's different now is that they've annexed the adjoining space and knocked a few holes in the wall to double their floor space. Sidewatcher was having some troubles with the sound system, but I think they're worth seeing again. 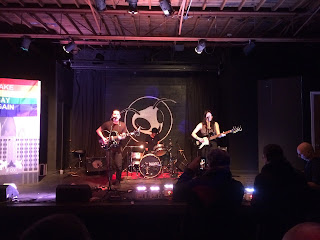 I couldn't pass up seeing Prude Boys at Planet Ant Hall. After seeing them for the first time two years at this festival, I try to see them whenever they're on a festival schedule.

The Planet Ant Hall is a great addition to the lineup of venues for the festival. If the small stage at the adjourning Ghost Light Bar was thrown in, it could fill the role played by the Knights of Columbus Hall for the Blowout. 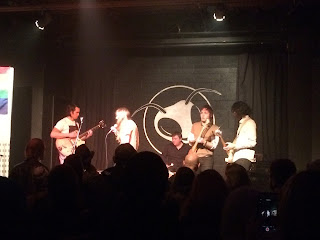 After circling a few other places and not being impressed by what I saw, I came back to Planet Ant Hall for Mexican Knives to close out the night. 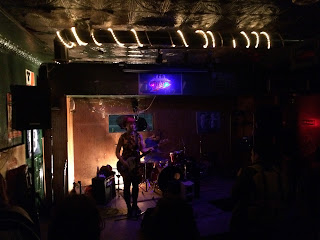 It's hard to get into Kelly's Bar to see bands, because they play so close to the door. It was worth the sacrifice of personal space to try out Dear Darkness. They play with a lot of heart, and make you forget that they're formed from only two musicians. 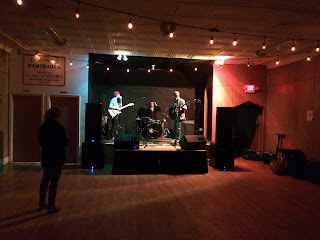 Coming back to PLAV Post 10 on Saturday felt like an awful choice. Twenty minutes after The Sugar Bombs were supposed to start, and they still hadn't begun. I don't know if it was the venue's fault, or they just had the bad luck to book acts that don't respect the festival goers and the festival's tight schedule. I just crossed the whole lineup at that place off my list.
The Detroit Party Marching Band caused the crowd to spill out of the front door at Jean's last year, so having them at Planet Ant Hall was a wise choice. 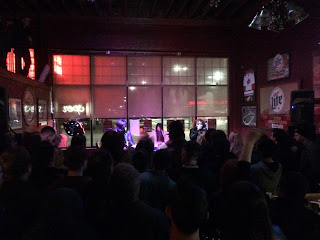 Tart at New Dodge Lounge delivered with their hard sound, and made me glad I wasn't at the PLAV. 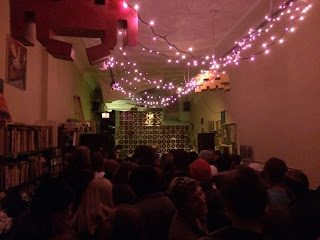 Despite Lo & Behold backing out of the festival officially, they still had live music going there. I'm not interested in adding my opinion on the related controversy, but you can read about it at the Metrotimes if you care to. What's lacking from the piece is that the HMF was started to fill the vacuum left by the Metrotimes Blowout trying to expand out of Hamtramck and shifting to the month of May, before that festival had its last installment in 2015 and quietly went away. 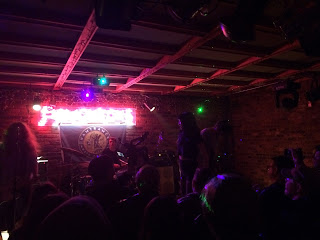 I haven't made an effort to to see Qween Kwong before, as it seems like they've been getting a lot of coverage stemming from their story, and not their sound, which tends to discourage me. I won't make the choice to miss them again, even if they get covered for the wrong reasons. 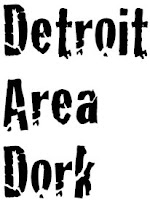 With a face for radio, a voice for print, and the prose of a new immigrant, I'll stick to amateur blogging
Posted up by Detroit Area Dork on 12.3.17