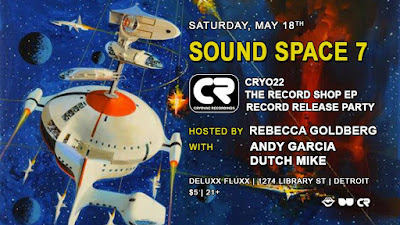 Journey into something deeper...
Underground techno all night

Cryovac Recordings is a collection of artists with a personal style that bleeds through their work. Cryovac artists have a relentless energy and passion for the music called techno. They are warriors with a clear vision and discipline on a course that is their own. The Cryovac crew believes in the vinyl record and has always been drawn to its’ unique quality it gives to sound. This e.p. celebrates the record shop, a crossroads of ideas and inspiration, where connections are made solid in the unity of the underground.

Rebecca Goldberg twists the 303 around a relentless 4/4 groove that evolves tweaks and pops into a sonic neurosis. Her yin yang approach applies a smooth steady delivery moving parallel to a raucous funk. The collaborative effort of Andy Garcia and Mike Kretsch produced a techno with moody rises and falls, stark kicks, and eerie effects held together with heroic energy. Toms and knocks, digital barks and farts, random clicks and ticks all fall into a galloping composition.
Posted up by RebeccaMich on 18.5.19

X RETURNS TO DETROIT ON MAY 21 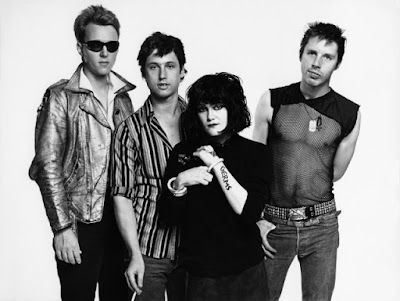 The iconic punk rock band, X, will return to Detroit as part of their spring/summer tour on Tuesday, May 21 at El Club. Exene Cervenka, John Doe, Billy Zoom, and DJ Bonebrake will be performing songs from their first four classic albums which were recently reissued and remastered by Fat Possum Records.

Los Angeles (1980), Wild Gift (1981), Under The Big Black Sun (1982) and More Fun In The New
World (1983) were re-released earlier this year. In addition, the band recently re-entered the recording
studio for the first time since 1984. In two days, five songs were recorded with producer Rob Schnapf; release plans are pending.

Formed in 1977, X quickly established themselves as one of the best bands in the first wave of LA's
flourishing punk scene; becoming legendary leaders of a punk generation. Featuring vocalist Exene
Cervenka, vocalist/bassist John Doe, guitarist Billy Zoom, and drummer DJ Bonebrake, their debut 45 was released on the seminal Dangerhouse label in 1978, followed by seven studio albums released from 1980-1993. X's first two studio albums, Los Angeles and Wild Gift are ranked by Rolling Stone among the top 500 greatest albums of all time. Over the years, the band has released several critically-acclaimed albums, topped the musical charts with regularity and performed their iconic hits on top television shows such as Letterman and American Bandstand. In 2017, the band celebrated their 40th anniversary in music with a Grammy Museum exhibit opening, a Proclamation from the City of Los Angeles and being honored at a Los Angeles Dodgers game, where Exene threw out the first pitch and John Doe sang the National Anthem. The band continues to tour with the original line-up.

Opening the show is are indie pop band Skating Polly from Oklahoma. Exene Cervenka was
instrumental in helping the band and producing their second album after the band approached her
after a concert. The women struck up a friendship that led to the musical collaboration. This is the
second time the line-up of the two bands have toured together and played Detroit.

The show will take place at El Club located at 4114 Vernor Hwy in Detroit. 313-279-7382. The show is all ages and tickets are available at this link: www.elclubdetroit.com/listing

For more info on X check out their official website: www.xtheband.com
Posted up by Dirk Belligerent on 2.5.19 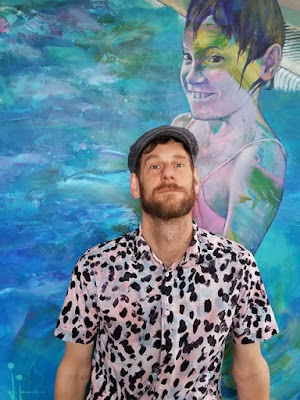 Local artist Jeremy Ian Harvey is known for his wildly colorful paintings, life-size sculptures and magnificent murals that can be found around town at places like Display Group, The Beer Grotto and Royale With Cheese.

The artist will present a show that combines new work and a retrospective from the last three years called “Ghost The World” on Saturday, June 8 from 7-11pm at The Hidden Gate Gallery in Eastern Market.

This exhibit is deeply personal to the artist who has become a full-time caregiver to his wife and daughter for the past few years. Each of them have multiple health conditions. The most prominent with his wife Kristen is Ehlers-Danlos syndrome (a genetic degenerative disorder that affects your connective tissue that causes joint dislocations, severe arthritis, intestinal disorders and often coexisting conditions). EDS is an extremely rare disease so it doesn't get a lot of funding for research.

The couple's ten year old daughter Juliana has had complications since soon after her conception. It was a very traumatic pregnancy, so many things went wrong and so many other things after. Julianna has autism, cerebral palsy and EDS as well. She had a regression five years ago which has made her non-verbal. Her last diagnosis was a condition called excitable catatonia which does the exact opposite of what catatonic behavior is. Julianna is constantly in motion, she never relaxes or focuses on one thing for too long and her energy is boundless and endless.

The round the clock care-giving made it impossible to hold a regular job, so the artist relied on various commercial art jobs and mural work to provide for the family. About three years ago the complications at home became too much to leave the house and Jeremy devoted his time to creating fine art in his home studio. After a year he had an artistic breakthrough with his work that came from a breaking point with the depression, stress and anxiety of the situation. “After a year of experimenting with techniques I had one of the biggest artistic revelations I’ve had in almost 30 years.” he says,“I had desperately needed to change the way I was painting. I was putting so much focus on details often spending hours on one tiny spot. I loved what I was doing but the constant bombardment of stress, anxiety and depression was life encompassing. Inside my head was non stop downward intrusive thought spirals and instead of my art helping me cope, all the over analyzing was adding fuel to that fire. I felt no good for myself and no good for my family.” Harvey says of the trying time. “Soon, through a lot of trial and error, I taught myself enough new bells and whistles that a whole new kind of style emerged. Everything now is very splashy with lots of color washes and loose brush strokes.” He went on to produce five art shows in two years with various themes such as clowns, party pics, David Bowie and even a tribute show to his wife Kristen.

“Ghost The World” features paintings selected from the previous five shows along with a whole new body of work. The theme for this new work is it's size format as the new pieces are all going to be very large, between four to six feet tall in scale. The artist says of the new show, “I want to pull every trick up my sleeve to transform the venue with my mural work. It's going to be very over the top and by far the most challenging. I’m about as excited as I can physically be for this one and It' officially starts now.”

For more information on Jeremy Harvey check out his artist page at: https://www.facebook.com/Jeremyianharveyart/ 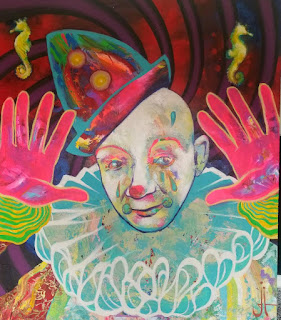 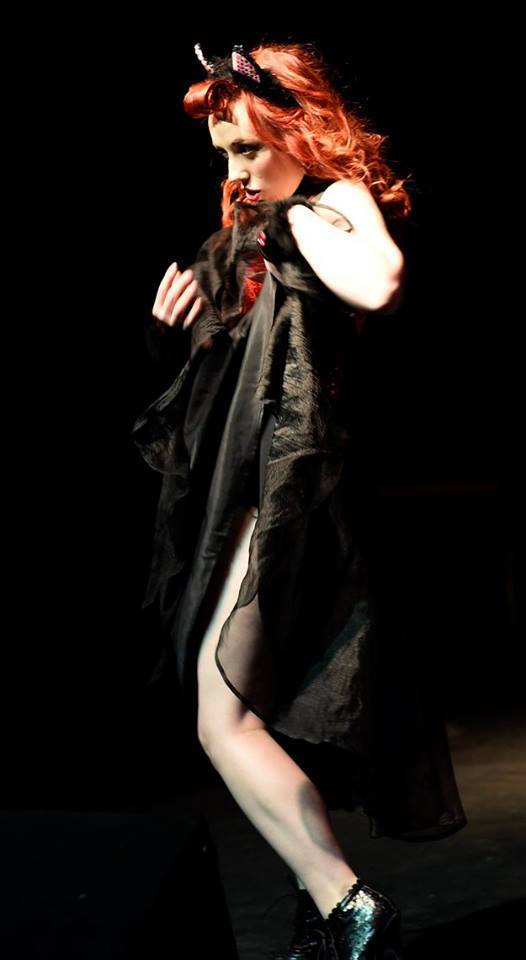 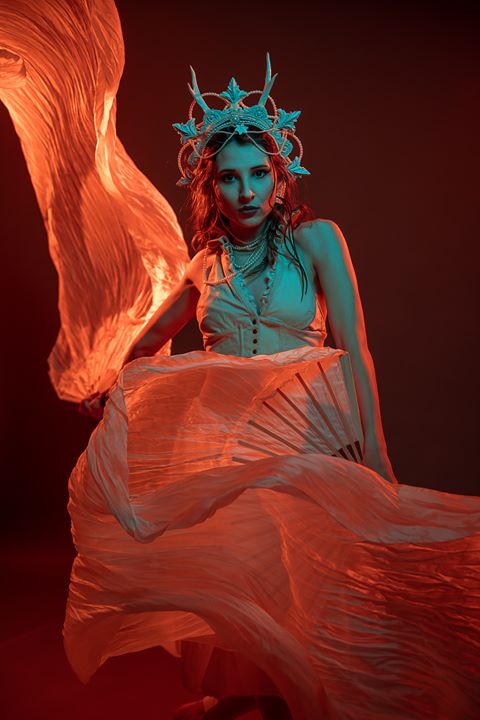 Raffle with fab prizes from our vendors and other local shops!