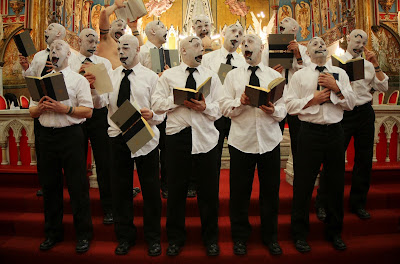 BACK BY POPULAR DEMAND! For One Performance ONLY!


On Saturday, August 25th, 2018, SATORI CIRCUS will present almost 30 years of original music with a new twist-by performing them with a choir! SATORI CIRCUS, accompanied by a slew of Detroit and Port Huron friends, will reinterpret original tunes as new arrangements via A Cappella and perform them live at the historical site of St. Albertus Church, one of the city's oldest buildings at 146 years old! Selections will come from performance art pieces such as “EQUILBRIUM”, “MOSES:39”, “Child-Proof”, “Funy As Hell”, “63mins” and “poems we tell ourselves”.

A thought had occurred a few years back for S.C. while reading an article about the Judson Church in New York City, which lead to reminiscing about the mid to late 80’s in Detroit, when S.C. was a young performance artist, and venues such as abandoned buildings, galleries, lofts and sometimes churches were used for performance. Whether it be dance, music ensembles or other alternative performance, these spaces were a great breeding ground for difference, self-challenges and stretching the imagination.

So with a wild thought at the forefront of his mind, S.C. started reaching out to churches that possibly would allow something wild and organic, and possibly on the verge of chaos to be performed within its walls. So the networking began. And from word of mouth, to friend to friend to acquaintance, S.C. was introduced to Matt Baka of St. Albertus Parrish, who opened the doors to the church and galvanized the concept of S.C. and friends singing songs from years past…and giving them new life with a new audience.

St. Albertus Church is the Mother Church of all Polish parishes in the Archdiocese of Detroit. The parish was founded in 1872 and was the spiritual home to many Polish immigrants in the late 1800s and early 1900s. St. Albertus Church, erected in 1884, still stands proudly at the corner of St. Aubin and Canfield as an icon of Detroit's Polonia. The iconography of the church is spectacular and is often compared to the finest Churches of Europe. The church was declared State of Michigan Historic Site and placed on the National Register of Historic Places by the United States Department of the Interior. The parish was officially closed in 1990 after 118 years as an active parish. A group of former parishioners and historians formed the Polish American Historic Site Association (PAHSA), a 501-C (3) non-profit group, to care for the Church and adjoining properties as a historic site and museum of cultural history.

Be prepared for the unknown and come with an open heart and head to witness a hybrid of performance art rarely seen in this Detroit Metro Area. We guarantee that you have never seen anything like this and you may never again. Sometimes, journeys end where they begin and begin where they end.


The 7th Annual Fine Art Fair returns to a new location, this year it will be held in the backyard patio at Detroit's Old Miami in Midtown. The Fair will feature some of Detroit's best artists showcasing sculpture, photography, fine art, metals, wood, textiles, ceramics and more!

Experience great art, acoustic music, and lots of cool drinks from their patio bar! Local artists, artisans,  music, and a grassroots community vibe is the focus of the annual event. Acoustic music will be provided by Bruce Farrell and the Laughing Madmen.

Saturday, August 11 from 11am to 8pm is the date and the fair is FREE to attend with free parking.

Local visual art/artisans such as sculptures, jewelry makers, metalworks and paintings will be featured - not mainstream product vendors - in order to keep the integrity as an “art fair.” Some of the many artists and artisans featured are Zacariah Messiah's unique spider art, photographer Laura Grimshaw, Unique head lights by The Horse's Banana, and the organizer of the Fair - artist Julie Fournier - will also display her paintings from her Smiling Eyes Studio (juliekfournier.com).

The FAF strives to provide a truly unique festival with an eye on benefiting the community they are a part of and enhancing the local quality of life for everyone involved. The Fine Art Fair funds community education via college scholarships, the local library, animal shelters and the local homeless charity the Congregation of Every 1. The Fair offers low booth fees to artists so they can continue to focus on art which ultimately stabilizes and improves our community.

For more information please visit www.detroitfaf.com or contact director Julie Fournier by email detroitfaf@gmail.com
Posted up by Dirk Belligerent on 26.7.18

Static invites you to go back in time for the night with the return of thee retro party of the year! On SATURDAY, SEPTEMBER 29, be prepared to flashback as the 23rd Big '80s Flashback Bash celebrates all genres of 80s music all night long! Each band performs selected songs in their various styles.Performing bands:
The party starts at 8 p.m. at PJ'S LAGER HOUSE, located at 1254 Michigan Ave. in Detroit. Call 313-961-4668 for info or check out www.pjslagerhouse.com

21 & over are welcome and cover is $6 and partial proceeds benefit the Hater Kitty Rescue Army, a local cat rescue group. www.HaterKitty.com
Posted up by Dirk Belligerent on 22.7.18

Get ready to celebrate Detroit Rock n' Roll at its finest! For one night only, Smitt E. Smitty brings you a flashback of Motor City music history! This year he joined forces with Stirling, Static Network, JFL Smith and sponsors Zim's Vodka, and in conjunction with Third Man Records, to bring you the third installment of The Detroit All-Star Garage Rock Punk Revue on Saturday, August 4 at 8 pm at The Tangent Gallery in Detroit. The show is also held in conjunction with the Cranbrook Museum of Art's exhibition “Too Fast to Live-Too Young to Die: Punk Graphics 1976-1986” held this summer at the museum.

This year's show will feature new bands and revisit some old favorites from the Detroit garage, rock and punk music scenes. Reuniting for the show will be The Hysteric Narcotics, The Motor Dolls and The Algebra Mothers - who will soon have their music catalog re-issued by Third Man Records. Current bands joining the bill are power trio White Shag, the retro band The Flipsters and the final musical performance ever of Jerry Vile and his 21st Century Boners. Veteran rockers Cinecyde and The Seatbelts will join the revelry too. The host himself, Smitt E. Smitty, will also perform a set of his new songs off his just released solo debut album “Just a Modern Guy.”
Also returning will be the Detroit All-Star Band helmed by drummer Smitt E. Smitty featuring a cast of local rockers: Stirling, Jerry Vile, Hiawatha, Nikki Corvette, Ricky Rat, Queen Bee, Linda Lexy, Spaz (from the Cadillac Kidz), Danny Kroha, Dave Rice, Michael Persh, Gerald Shohan, Richie Lovsin and Blackwolf. The All-Star Band will be performing classic Detroit favorites and a special finale for your listening pleasure.

Special guest MC for the evening will be actor/bartender/raconteur Jimmy Doom and guest DJ Ricky Rat will keep the house rockin' throughout the night.

The event will also have a Made in Michigan vendors room that will feature local vendors selling everything from Detroit t-shirts, unique jewelry and handmade items, and concert photos and posters from Detroit's rock past. GrimShopArt featuring the work of artist Gary Grimshaw and rock photographer Leni Sinclair will be there. 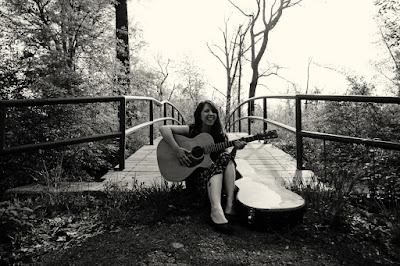 Award-winning singer-songwriter Emily Rose will mark the release of her third full-length studio album with a concert on Saturday, August 18 at 8pm at The Ant Hall in Hamtramck, Michigan. Celebrate the highly anticipated album, ‘Wake Up Brave’ as Rose unveils the songs she has labored over for nearly three years. Rose will perform solo, in addition to being joined by her musical trio-mates Audra Kubat, and Tamara Finlay. Fellow singer-songwriters Scott Fab and Carmel Liburdi will open the evening with their original music sets.

The Detroit based singer-songwriter has dazzled audiences in her hometown and beyond for several years now and was named “Outstanding Americana Vocalist” by the Detroit Music Awards in 2018. Her roots are steeped in poetic songwriters such as Leonard Cohen and Fiona Apple, and Rose began composing and performing her own music as a teen. Her mode of articulation borders on confessional, while grounded in observational story-telling. Taking on uncommon narratives and building their soundtrack – her reward is in the telling. Music writer Scott Kraus wrote,“Emily Rose embodies the concept of songwriting as calling over profession.” She released her first studio album in 2006.

In addition to extensive touring throughout the Midwest, Rose has had her songs included in movie soundtracks and the song “Seven Rooms” in the Detroit: Become Human video game. She is also an author of her first book of poetry, “Cemetery Tea Party” released in 2014. Rose has been a music educator for almost a decade. Her latest body of work, ‘Wake Up Brave’ will bring into focus the canon of this compelling and poignant artist.

Carmel Liburdi is a singer/songwriter who performs alternative folk with ragtime, punk, and jazz influences. Liburdi's fun performances are full of energy and soul. Her most recent release "Insomnia Slumber Party" was nominated for a Detroit Music Award.

The Ant Hall is Planet Ant Theatre’s newest performance venue; established on March 2017. Throughout its 20-year history, Planet Ant has produced original creative content, as well as myriad theatre/improv/music/comedy festivals, musical productions, comedy tournaments, and events for both regional and national artists across a vast spectrum of mediums.

Tickets are $10 at the door or $8.50 in advance online at http://www.planetant.com/tickets/emilyrose

For more information on Emily Rose visit: https://www.reverbnation.com/emilyrosemusic or email emilyrosemusica@emilyrose.com
Posted up by Dirk Belligerent on 22.7.18 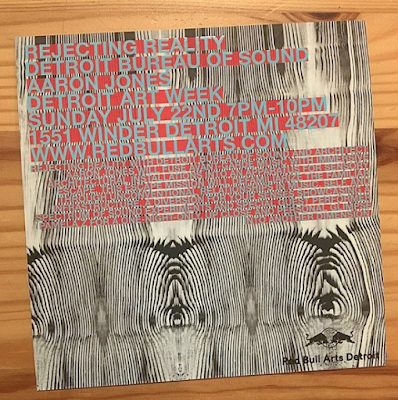 REJECTING REALITY with Detroit Bureau of Sound and architect Aaron Jones will fuse avant-garde music with immersive architectural installations into an apparatus for sensory escape. This escape mission will defamiliarize the familiar through unconventional relationships in music, self, and infrastructure. A diversion for your senses showcasing a spectrum of sound experiments and special guest performers Apetechnology, Onyx Ashanti, and Pamela Z within a fully transformed environment at Red Bull Arts Detroit (formerly known as Red Bull House of Art). A one-night-only, up close and personal glimpse into another dimension.

This event is free & open to the public of all ages.