A vaudeville revue show full of maniacal mockery and provocative parodies of new and nostalgic cartoons.

Expect loads of lascivious laughs that will make your belly ache from this action packed show!
Featuring an all-star cast of Detroit's most notorious and sought after vaudevillians:

Bowie and LaMoan's Variety Revue will delight Detroit audiences by fusing together their styles of decadence and debauchery with talents that will leave you breathless! This all inclusive show will feature performers specializing in the themed acts ranging from performance art, music, comedy, drag, sideshow, belly-dance, circus arts and burlesque. There is something for everyone to feast their eyes upon!

Lushes LaMoan has been dubbed "Detroit's hardest working showgirl" due to her work ethic and compassionate commitment to the arts. She has been a performance artist her entire life. With experience on many theater stages, she was an international improv comedian by the age of 18, model, actress, singer, seamstress and designer. This showgirl is a quadruple threat! Lushes has been performing burlesque since 2006, she incorporates all of her fine art and performing art skills to bring to you awe inspiring numbers you won't forget!

Chloe Bowie is a Detroit Native with a background in musical theater. Her goal is to modernize the art of burlesque by bringing her unique musical style of her remarkable voice and ukulele to her performance. She started burlesque in 2008 as an original cast member of the Detroit Dizzy Dames, and moved on to starring in large scale vaudeville style productions. Shortly after her rise as a solo star, she founded the Detroit Burlesque Company. Not only statuesque but also incredibly striking, Chloe Bowie will surely strike your heart chord while strumming on her g-string.
For more information on the event check out the Facebook event page at: https://www.facebook.com/events/184551392386819/
Posted up by Dirk Belligerent on 29.6.18 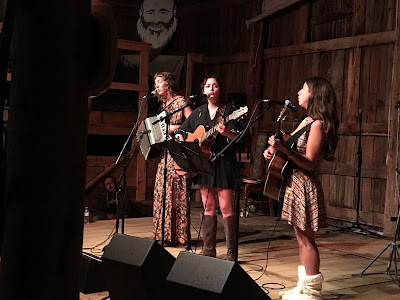 The Detroit singer-songwriter trio Kubat, Finlay and Rose will mark their Ann Arbor debut performance at Michigan's historical folk venue, The Ark. Celebrate a night of harmony and story through song with very special guest Andru Bemis. The show is on Friday, July 6 with doors at 7:30 and the show at 8pm.

Kubat, Finlay, and Rose is the musical collaboration from three of Detroit's top singer-songwriters: Audra Kubat, Tamara Finlay and Emily Rose. Each of these three artists not only share talent and a flair for songwriting, but have multiple achievements of recordings and awards between them. While they often found themselves performing on the same shows, the musicians began performing together and KFR was formed. They were quickly named one of the ‘Best Up and Coming Detroit Bands’ by noted music journalist Jeff Milo. They specialize in lush harmonies, thoughtful original compositions, and innovative interpretations of a variety of popular covers. With a focus on storytelling, the trio mesmerizes audiences with their haunting voices and siren songs. They have shared stages with the likes of War and Treaty, The Sweet Water Warblers, The Appleseed Collective and Scott Fab, and toured throughout the state. While Kubat has performed at the historic folk club The Ark before, this will be the first time for the trio, so you can expect a timeless performance on this night.

Special guest opening act Andru Bemis is an American Folk musician, piano tuner, audio engineer and concert promoter from New Mexico, currently residing in Michigan. As a singer, songwriter and multi-instrumentalist, he has performed throughout North America since 2001, traveling mostly by train, bus and public transportation. He embarked on two notable tours with actor/comedian/musician John C. Reilly. Bemis has released three solo albums to his credit and has many collaborations with other artists. http://www.andrubemis.com