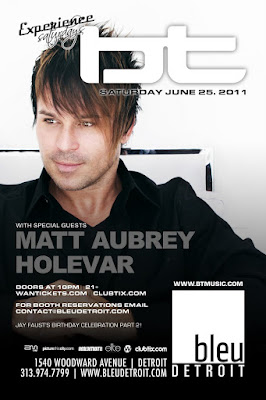 Given his enviable resume and illustrious fifteen+ year career, it is difficult to imagine that platinum-selling artist, visionary producer, film composer and technologist BT may only now be beginning to create the best work of his career. An internationally-renowned recording artist himself, he is trusted by superstars such as Sting, Britney Spears, Sarah McLachlan, Tori Amos, Madonna, Seal and Peter Gabriel to produce modernist and memorable hits, with a bleeding-edge electronic flair. He has composed unforgettable scores for films The Fast and the Furious, Go, Stealth and Oscar-award winning Monster. With his latest two-hour, double-disk opus, These Hopeful Machines, BT definitively weaves both the technical prowess and compositional mastery that reminds us all why he’s the composer that all other composers and producers study.

On his last full-length LP, This Binary Universe, he created an entirely new genre of evocative electro-acoustic music. As Keyboard Magazine wrote in their review of the album, “In a hundred years, it could well be studied as the first major work of the new millennium. It's that good.” Throughout his illustrious career, BT has been able to seamlessly weave together complex, groundbreaking musical elements into compositions that resonate with listeners of all types without seeming academic and incomprehensible.

From an early age, BT, born Brian Transeau, demonstrated a remarkable aptitude for playing and understanding classical music. He was heavily influenced by avant-garde and romantic composers such as Stravinsky, Bartok, Debussy and Rachmaninov. His biggest influences, however, were from everyday sounds that most would take for granted. Growing up in his childhood home in Maryland, BT would notice the meter of the grandfather clock in his foyer, the micro-rhythms of crickets and cicadas and the ambience of passing trains at night.

“When examining my creation process, it makes perfect sense why I am a forced technologist,” he explains. ”I frequently face the fact that the tools I need to compose music simply don't exist. It is like being an architect without bricks or mortar. I routinely create my own bricks and connective tissue as the diving off point to the compositional process.” The drive to actualize the tools BT envisions has led to his evolution as one of the most cutting-edge programmers and technologists in music today. He has expanded this reach into a visionary software venture, Sonik Architects which launched its critically- and commercially-acclaimed iPhone application, Sonifi™, last fall.

“I make protracted compositions in classical form with a modern tonal palette. I like to incorporate expanded harmonic structures and tonalities that you don't typically hear in popular music,” remarks BT. “The goal is for my audience to feel something evocative and meaningful but qualitatively different than anything they’ve heard or experienced. It's like searching for a new species of music. In a way, I am more of an explorer than an composer.”

BT is the earliest of early adopters and widely accredited as a maven of modern sound techniques. “There is a very specific lineage of great composers who blazed a new path in music because they weren't afraid to experiment with new sounds, new techniques and new technologies. These progenitors - Cage, Stockhausen, Xenakis - are the people who set the foundation. Let’s not forget that the piano was a radical new technology in it’s time. I had a music theory teacher as a boy who once said to me, ‘Nothing new will ever happen in the arts again. It's all about studying what's already been done and how you combine things.’ I don’t think I slept for weeks after that. I knew that was an incomplete idea and set out to prove it wrong ever since.”

An avid lover of both mathematics and physics, BT looks for inspiration by experiencing natural phenomena, frequently discovering complex mathematical patterns and structural relationships in everyday objects and environments that are often taken for granted. “I find things in the natural world that resonate with me on a very humanist level, those things are typically the core drive for the creation process. My music is an expression of that awe and admiration of the natural world”, he explains. “Quite simply, music is applied mathematics. It is aesthetically beautiful as well as practically beautiful. Rhythm, harmony and structure are all mathematical and math, quite simply, is beautiful.”

“My ultimate goal is to keep the emotional counterpoint and the integrity of the song intact, even when pushing the envelope with style and technique. The faster things get, the less people are willing to take in a body of creative work. How many people can stand in front of a painting and deeply take it in? There are so few things now that will engage us. The intent of consuming music is usually to have an awareness or a feeling, to have an truly, empathic connection to others. Whatever it is that you're going through, music makes you feel less alone. You feel a primordial connection to people and the natural world. My hope is to create something that make people feel that they have consumed something that completes a void. I want to create something lasting.”
Posted up by RebeccaMich on 22.6.11