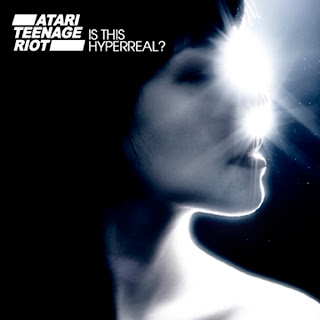 After an 11 year hiatus, Atari Teenage Riot is back with Is This Hyperreal?, out digitally today via Dim Mak (physically on June 21st)! The follow up to 1999’s critically acclaimed 60 Second Wipeout, Is This Hyperreal? is a sonic masterpiece twelve years in the making and affirms ATR’s cultural relevance yet again.
ATR are now a trio with new member CX KiDTRONiK on MC duties, sharing the stage with the original line up of Alec Empire and Nic Endo. This addition of CX is reflective of a new record that is mapped by socially conscious lyrics; angst ridden punk rock riffs and throbbing 909 drum machine patterns.

Characterised throughout with an urgent sense of protest and debate, Is This Hyperreal? is in parts a cultural milieu cautionary tale and futuristic bass laden electronic diatribe. Delving into our current social malaise coupled with an explosive big room production reminiscent of early hardcore raves and punk rock shows, this record sounds fresh and entirely of its time.

“It is the definite protest album for the Google age,” Alec explains. The album features a stellar cast of guest performances including Dim Mak’s Steve Aoki on ‘Codebreaker’; Is This Hyperreal? is not a sentimental reunion about reliving the past but a major software update.

Get tickets now or you may miss out
Posted up by DIETROIT on 7.6.11