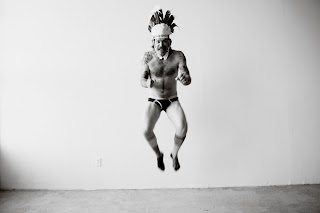 After creating three albums of dirty and danceable garage rock anthems, Hollywood’s favorite son and Eagles of Death Metal frontman, Jesse “The Devil” Hughes, is unveiling his solo debut as Boots Electric. Titled Honkey Kong, the album will be released on September 20th by Dangerbird Records. Itwas produced by Tony Hoffer (Beck, Depeche Mode, The Kooks) and co-written with legendary keyboardist Money Mark, best known for his many collaborations with the Beastie Boys.

Honkey Kong is the sound of Boots Electric coming out of the closet. Under the moniker, Hughes expands his sonic palette while continuing to deliver the hooks that he’s known for. The electronic drums that kick off opening track “Complexity” immediately signal the new direction. The track is a mix of glam-pop, keyboard-heavy dance grooves, and Hughes’ signature brand of rock ‘n roll grit that drips with swagger. Elsewhere, he tries on space-funk synths on the track “Boots Electric Theme” (featuring Brody Dalle), and “Trippy Blob” has some of his most absurdist lyrics yet.

Though a winking self-awareness has long been one of Hughes’ calling cards, he’s also written some of his most earnest songs yet. “No Ffun” is an honest-to-goodness ballad and “Swallowed by the Night” is a soulful slice of honky tonk gold. Honkey Kong reveals what many already knew – beneath the tongue-in-cheek lyrics and his charismatic strut, Hughes has always been a gifted pop songwriter at heart.