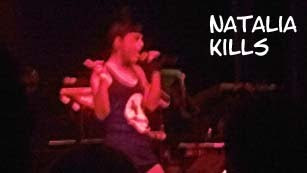 Natalia Kills, a new pop artist from the UK opened the show with a very short set that featured a couple of sexy dancers and a drummer doing her best Shelia E. impersonation. While Natalia Kills was full of piss and vinegar, being the first act she was mostly dismissed by the crowd as a distraction slightly better than the repetition of electronic music and house ads displayed on the stage’s large center screen. 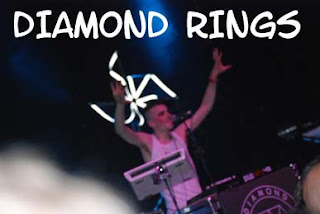 Diamond Rings performed next with a set with of just himself singing and dancing between his laptop/keyboard setup and guitar and microphone on the opposite side of the stage. He fared better as the crowd caught on to his frenzied guitar playing while singing his catchy electro-pop glam tunes. I spoke to Diamond Rings before the show as he said he tries to make his solo show as interesting as a full band playing. His record “Special Affections” is being re-released by Astralwerks next week and I’ll definitely be seeking it out. 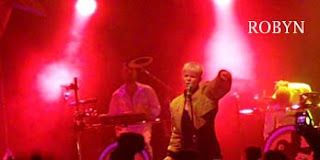 You could tell Robyn was who the crowd came to see as when she came on stage, the crowd on the floor began to expand and a place that seemed half full moments before now seemed overflowing with happy, dancing fans. This is the second show I’ve seen with Robyn and while her set was similar to her previous show at the Crofoot last summer, her stage presence was amplified this time around as she danced frantically the entire show, rarely pausing between songs. With most of the songs from her recent “Body Talk” collection, Robyn plays a short show at just 50 minutes before she leaves the stage. However, she makes up for it with two long encores that include a dazzling version of “With Every Heartbeat” with the crowd taking over the chorus. She also pulled out a more hip than hop version of “You Should Know Better” which sounds better this time even around without Snoop Dogg. Overall, a good show I’d be more than happy catching a third time.

Be sure to catch my video interview with Diamond Rings at my Most People Are DJs website on Thursday.