Matt & Kim played the Majestic Theater on June 24th, along with The Hood Internet and The Thermals I first came across Matt & Kim when they played at Detour Magazine's Rock City festival back in July 2008. I had never heard of them before, but since I had already paid for the pass, I figured out I might as well watch some of the band that had the 3rd highest spot on the bill. They played the Majestic Theater back then too. I remember the place was maybe half filled. I also remember finding their music to be infectious and fun. Aren't music festivals great?
So the doors opened at 8, I arrived outside the Majestic at 8:45, and the crowd was still lined up around the block still waiting to get themselves processed through the doors. Signs were posted outside saying that the show was sold out.
If they were infectious three years, they're down right an epidemic now. They get far more involved with the crowd, getting them excited. Kim even got nearly every guy to take his shirt off during one song. The level of effective persuasiveness was remarked upon by many women there. I think that the essence of their happiness should captured in a pill form and sold as an antidepressant. Its effectiveness would put all the competition out of business. 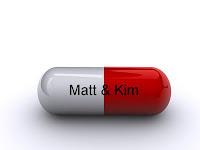 The first thing that put their set apart from the previous time I saw them live is their venture into the use of "mash-ups" at the beginning of songs. They would play the hook from a well known song for a bit, and then blend it into the beginning of one of their songs. I'm not going to try to list all of the songs they used, but the ones that stand out the most in my mind are Biz Markie's "You Got What I Need", Ludacris's "Move Bitch", and 69 Boyz's "Tootsee Roll". Most drummers seem to have accecpted their role at the back of the stage. They stay behind the rest of the band, and let them have most of the attention. Kim doesn't fall into this role. She often likes to stand up on her drum stool, or the kick drum in order to encourage the crowd to get more involved. At one point she even had the crowd all put their hands in the air so that she could walk across them. She stepped out onto a sea of outstretched hands that held up her weight as she attempted to do a booty roll dance.
During one song a fan managed to get on stage for a second, but quickly dived back off. A few seconds later Matt stopped right in the middle of the song in order to discourage security from roughing the guy up too much. I can honestly say I've never seen that happen before.
At one moment between songs Matt mentioned that he once had a gun pointed at him on that very city block. I've got to say it's always a bit embarrassing to hear a band talk about being the victim of some kind of crime on one of their previous tour stops in Detroit. We usually hear that the band's tour van was stolen or something like that, but this was even worse. That theater definitely had the feel of being sold out. Despite it being a cool night outside, the inside got to feel hot and muggy from all the closed in people. It seemed as if no one was willing to leave early, and the placed was packed tight right up until the last song.
All photos by Riaz K. (except for that pill thing)
Here's his full set for the night

This post's writing by:

I'm a dork, I live in the Detroit area, and sometimes I take blurry photos on an outdated camera
Posted up by Detroit Area Dork on 29.6.11