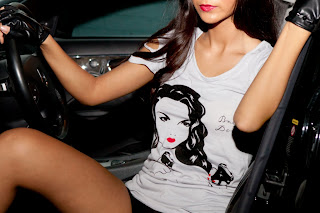 -  Reboot of the new and improved Pink Pump website www.pinkpump.com

Detroit fashion juggernaut, Pink Pump and the internationally renown painter, singer and icon, Niagara- are hosting a launch party for their new fashion collaboration of Niagara inspired tops, tanks and dresses on Thursday, June 23rd 7:30 PM at The Royal Oak Pink Pump location, which will unveil more than 10 variations of some of Niagara's most indelible, brazen and iconic images.

"Her work is both empowering and timeless", says collaborator and Pink Pump/P2 owner, Tawny Thieu. "And Pink Pump intends to bring her to a whole new generation of women through the Pink Pump/Niagara line."

The media caught a sneak peek at a few of Niagara's prototypes at the March 2011 Alter Ego fashion show at P2, but a dozen styles and variations of her most famous imagery.

Niagara who has been called, The High Priestess of Punk, as the enigmatic and scantily clad singer, who fronted both Destroy All Monsters and Dark Carnival with the legendary Stooges guitarist, Ron Asheton, was also heralded as, "The ONLY real woman of Rock and Roll" by the godhead of Rock criticism, Lester Bangs. As an important painter of Post-Pop female empowering iconography, Niagara has inspired and influenced a generation of fans and artists while exhibiting the world over. Iconic Lowbrow painter, and founder of the world's biggest art magazine, Juxtapoz, Robert Williams referred to her as, "the Empress of the one liner", in reference to the painter's witty and attitude-drenched lines delivered by the beautiful and dangerous subjects of her paintings.

Niagara has also been working with Japanese trend makers, Hysteric Glamour for the past 6 years, and has also designed a Van's sneaker line of her edgy, "Niagara Girl" imagery in 2008. Niagara who has exhibited internationally, is presently preparing for exhibits in Berlin -and her first solo show in Detroit in 7 years at Re: View Contemporary Gallery in July, 2012.

Pink Pump, the fastest growing ladies apparel chain of fashionable footwear and private label apparel in the Metro Area is a terrific compliment to Niagara's Femme empowered paintings and imagery, since Pink Pump is a 100% female owned business, helmed by Tawny Thieu who also created the upstart $50 and under fashion spinoff, P2 as well as the posh Bloomfield Hills salon, Liquid, was recently featured in dBusiness magazine as one of their 30 in Their 30's cover story on exceptional entrepreneurs aged 30-39.

-The second P2 store is scheduled for a Summer 2011 opening in West Bloomfield, MI.