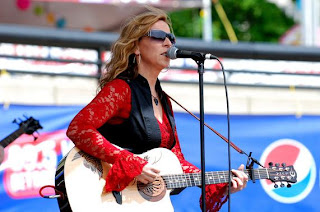 Michigan's own Julianne Ankley is releasing her second solo album "Vivid" on Wednesday June 15, 2011.  This new masterpiece will showcase Julianne's latest 11 songs, all which reflect the complexity of a grown woman and the various emotional experiences accumulated over the course of her life.  The vivid colors on the cover of the CD (also created by Julianne) represent a time of growth for her and harmonize with the overall theme of this album, to empower women to let their "vivid emotional colors shine through."

Julianne Ankley has been a fan favorite in Nashville, Tennessee throughout the years. In fact this CD falls during one of many highlights in her tenure career. The week prior to the release of "Vivid", Julianne Ankley will be co-hosting the Hard Rock Stage during the CMA Festival with country superstar Cowboy Troy and friends. Julianne will also be performing on the Gibson Acoustic Stage during the CMA Festival. Throughout her journey she had the wonderful opportunity of being mentored by Jim Lauderdale who is the General Manager of the Grand Ol Oprey.

Born and bred in the rural thumb of Michigan, Julianne was raised on country music.  Little did she know when she was three (3) and taught herself to play the piano that that would be the first of many successes for her in the music industry.  Her powerful voice and songwriting granted her 17 lifetime nominations in the Detroit Music Awards, one (1) Detroit Music Award win for Outstanding Country Recording in 2007 with Redhill, and three (3) Great Lakes International Songwriting Contest awards and top three in the nation for the Chris Austin at Merlefest.  She has opened for more than 60 national acts on major stages such as DTE, Freedom Hill, Lexington Music Theatre, and Bluebird Café and performed on stage with notorious names including Alto Reed, Mark Farner, Mitch Ryder, and Jeff Daniels. Named CBS Detroit's "Best Of" Country Music in Detroit, she has truly made a name for herself in town and has participated in many Motor City events, such as National Anthem performances at Red Wings games and five (5) years of noteworthy performances in the Detroit Hoedown.