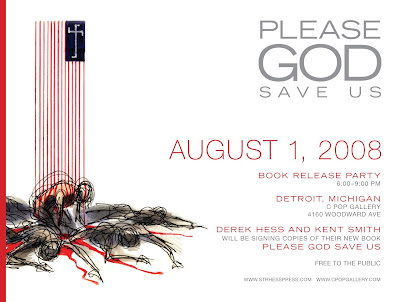 1st emailer to ask for a copy of this book AND include your mailing address gets it!
GONE !!!

(Detroit) –Former Detroiter, CCS standout and internationally renown artist Derek Hess, along with Cleveland politician Kent Smith will celebrate the release of their new book, the socio-political art tome, Please God Save Us, with a release party and book signing at the CPop Gallery ONE NIGHT ONLY, on Friday, August 1st, 2008.

The party will run from 6 PM to 9 PM, offering attendees the opportunity to not only purchase Please God Save Us, but also to ask questions and share thoughts with both Hess and Smith who will be in attendance.

The book, which was officially released on July 4th, is a collection of politically charged art works by Hess and complimenting text by Smith created to challenge the current ideals of society and create awareness of both political and religious issues inundating government today. The pieces were first introduced to the public at a local art show in December of 2006 and have since taken on a life of their own, drawing both praise and criticism. Addressing a variety of topics including Stem Cell research, the war in Iraq, the Christian right and the environment among others, the book, according to it’s authors, is intended to “educate and inspire its readers whether or not they agree with either the art or the words”.
CPop Gallery has been proud to haveexhibited Derek Hess’ Rock Posters, Fine Art pieces and illustrations in 4 solo shows and 2 group shows over the past 15 years. Considered the “Michaelangelo of Rock Art”, Hess no longer produces rock posters, but incorporates his Humanist vision into his work, as well as being the namesake of the incredibly popular hard rock tour, “Strhess Fest” and his own Strhess clothing line .

Please God Save Us, is published by Hess’ own Strhess Press is 112 pages and will retail for $25.
For more information about the Please God Save Us release party or the book itself please contact, Tom Thewes at tom@cpop.com or visit www.strhesspress.com.