Jonathan Richman a singer and guitarist who founded the proto punk greats The Modern Lovers performed on June 5th at The Magic Stick.  Many songs were delightful and fun like I Was Dancing in the Lesbian Bar. His facial expressions are extremely spirited.  It is fitting that he has appeared in a few films. In There's Something About Mary he performed a hilarious acoustic song which aided in making the film such a comedic hit.  An up tempo sound, Richman's dynamic and innovative wordsmithing, some spanish singing, and varied subject matter ranging from the legendary artist Rembrandt to romantic problems to pill taking made for a diverse and entertaining show.


The Dandy Warhols a psychedelic power pop band formed in 1994 performed June 8th at The Royal Oak Music Theatre. A two hour set and the vast musical catalog of songs delighted the audience. The single "Every Day Should Be a Holiday" which was featured in There's Something About Mary was a crowd favorite. Bodies and heads swayed and a few folks sang along with the choruses. Their career has been fleshed out from garage infused shoegaze to songs with more of a eighties influence. It makes sense their 2003 album was produced by Nick Rhodes of Duran Duran. One song had a tender sound which recalled Leonard Cohen a bit and featured bowed guitar playing. The combination of the socially relevant lyrics, intergalactic riffs, broody 80's industrial sound, creative orchestration, high pitched melodious choruses, and a slithery singing delivery was seductive and impressive. 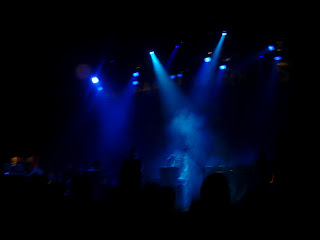