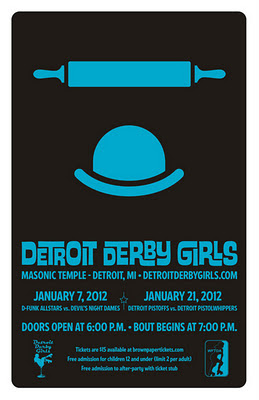 The Detroit Derby Girls' Fourth Bout of the Season
Saturday, January 21
Detroit Pistoffs vs. The Pistolwhippers.
Doors open at 6 p.m., bout starts at 7.
All tickets $15, up to two children under 12 admitted free with each adult admission.
Tickets will be available at the door
I had the chance to get some pre-bout analysis from the Pistoffs' Captain, Kraken Whips

Detroit Area Dork: Do you think there was a lot of expectations on your team when the season started, being the returning champs and all?
Kraken Whips: Oh yeah of course, but what people didn't realize is we lost some teammates to their real lives, and on top of that we picked up a ton of rookies. So we weren't the exact same team everyone saw at the 2011 Championships. We also had some [Travel Team] vets that took a hard loss very recently at the WFTDA regionals. The Pistoffs had a lot of "pulling ourselves up by our bootstraps" type scenarios before the bout came. We were as prepared as we could have been at that point, and I think we did great.
Detroit Area Dork: What did you take away from the last bout in light of losing by only one point?
Kraken Whips: We really had to swallow our big girl pills on that. There is something to be said about only one point in derby. If ya ask me that's pretty much a wash. It made me realize if we can go through all the changes we were going through and still make D-Funk sweat then we have a really great team!
Detroit Area Dork: What role do you think penalties played in your last bout?
Kraken Whips: Well, the officials have been going through drastic changes as well, so they've had to train new members and some of the things that came up on the track that day,... I don't know that they were ready for that. A lot of stuff wasn't called on both sides and a lot of silly stuff was called on both sides too, so again it was a wash in that respect as well. I will tell you we've been working very hard to not pull penalties. We want a clean and effective game next round.
Detroit Area Dork: What do you think The Pistolwhippers' greatest assets are?
Kraken Whips: Oh boy, they have a lot of really solid players, they have fast Jammers and hard hitting blockers, all the things that make a team great, they shall be worthy opponents.
Detroit Area Dork: When going up against a team that gets a lot of penalties like The Pistolwhippers, do you alter your strategies a bit to take advantage of that?
Kraken Whips: I don't know that they get any more penalties than we do, but I will say that we don't try to bait them into penalties. We are more concerned with not racking up our own penalties. Penalties in derby are much different than other sports, for instance when you are watching hockey you can see the intent clearly most of the time. With derby the floor could be too slippery you fall and suddenly you are going to the box for a major low block. You just never know what you'll get called for, but if you never get any calls it just means you aren't working. So a little bit is okay, it doesn't mean you play dirty it simply means you're trying something new.