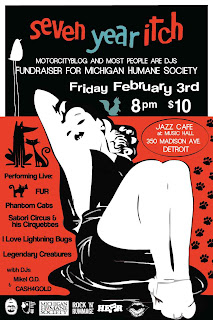 “Seven Year Itch”
For 7 years MOTORCITYBLOG and Most People Are DJs
have been documenting Detroit events producing over 500 video interviews and podcasts with
local and national talent. In celebration of their continued efforts, please join us for the
“Seven Year Itch” featuring five of Detroit’s most talented acts in a fundraiser for the Michigan
Humane Society at The Jazz Café inside Music Hall Detroit on Friday February 3rd 2012 7:30pm
Seven Year Itch will feature FUR, Phantom Cats, I Love Lightning Bugs, and Legendary Creatures
filling the Jazz Café with an array of musical sounds ranging from electro pop to sultry swoon.
Also making a special guest showing will be performance artists Satori Circus & his Cirquettes.
“Our goal is to celebrate the longevity of MCB and MPAD with a fun event which highlights
some of the talented musicians on the rise while raising money for a great cause such as The
Michigan Humane Society.”
“Seven Year Itch”
Fundraiser for Michigan Humane Society
7 Year Celebration for MOTORCITYBLOG & Most People Are DJs
Jazz Café inside Music Hall Center for the Performing Arts
350 Madison St Detroit MI 48226
Friday February 3rd 2012 7:30pm
$10 at the door
Confirmed Lineup:
FUR
Phantom Cats
I Love Lightning Bugs
Satori Circus & his Cirquettes
Legendary Creatures
Thanks to our Sponsors:
HEARMag – Rock N Rummage – Knerd.com
Posted up by DIETROIT on 6.1.12