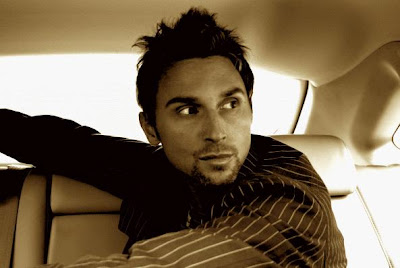 Brian Vander Ark, Jamie McCarthy and Crashing Cairo at The Magic Bag
Jamie McCarthy Celebrates the Night with a release party for “Salvation”, his new Album

Imagine Hunter S. Thompson and The Beastie Boys sitting at the bar - they’d be sipping Jamie McCarthy’s funky rock brew blended in the inspiration of G. Love and Special Sauce, Jack Johnson and Citizen Cope. Jamie McCarthy is back for round two with Salvation, the follow up album to 2007’s Strange Town. And he’s celebrating with a release party in Ferndale as SPIN magazine and WDET FM 101.9 present Brian Vander Ark, Jamie McCarthy and Crashing Cairo at The Magic Bag on Friday, September 26.

Jamie McCarthy was only 20 when his alt-rock band Modern Cocktail Party scored a deal with Warner Brothers. After a year of touring and a fallen deal with the label, Jamie was swept into the world of commercial and voice over work.

Years later, Jamie was about to embrace the music industry again when his father, legendary Hall of Fame radio host J.P. McCarthy, passed away. Jamie spent years recovering from the setback and finally returned to music after a long hiatus. He began writing music again after a trip to Santa Monica, California, where he saw a homeless man hang himself from a tree on Ocean Avenue. Jamie was deeply moved by the tragedy and the experience inspired him to begin writing a new album. He swore that he’d finish the album and the result was the 2007 release Strange Town.

At that point, Jamie vowed never to take life too seriously. His lyrics took a more confessional tone with an introspective reflection that led to the path of Salvation, the new album.

“I had come to terms with all of my personal confessions on Strange Town,” Jamie explained. “Salvation evolved from Strange Town. It’s more free spirited and less about self-analysis. I was feeling a little more centered during the Salvation recordings even though the first song on the record is about wishing someone who’s broken your heart was dead. So I guess being centered is all relative… lol.

Perhaps the next record will find me totally out of the darkness, but I hope not.”

During the recording of Salvation, the band played an ongoing game of Pass the Bass. All of the players took a stab at playing the bass. Pat and Geoff are much better bass players and they usually won, but Jamie managed to play the bass on Girlfriend and a Check. Jamie also played drums on a few of the tracks – he secretly wants to be a drummer.

But the days weren’t without some tension. On the day when the band recorded Can’t Shake You Out My Head, an aggressive angst-filled song, Jamie turned into a director who wanted to get the best performance from his actors. He threw a fake fit in the studio and told Pat and Geoff that he was unhappy with how the album was coming along. Jamie wanted them to feel the tension, especially in the guitar parts.

“This is very out of the ordinary for me because I'm about as laid back in a studio as they come,” Jamie explained. “They sure captured the mood. After we were done recording I told them I was just messing around. Then I took them out for an amazing dinner and professed my musical love for them.”

After the band finished the recording, they took Salvation on the road for a test drive. They played to about 2,000 people on the Best Buy stage at the Taste of Chicago festival in June and CIMX FM 89.9 radio recently invited him to play an event in Detroit.

In addition, Jamie’s song Meant 4 Me also joins the music of two-time Grammy-winner Ozomatli, Michael Franti and Spearhead, Modest Mouse and other bands in Sometimes in Life, the new independent film directed by Anthony Vallone for ValloNicka Films.

For more information, or to listen to Salvation in its entirety, visit www.jamiemccarthymusic.com or www.myspace.com/jamiemccarthy

MCB will be onsite for a video interview and photos from the show
Posted up by DIETROIT on 17.9.08