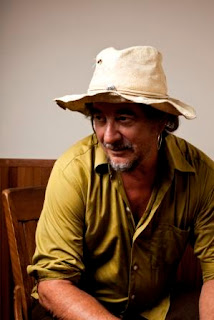 Greg Brown, accomplished songwriter, co-founder of the influential indie
roots label Red House and former musical director for Garrison Keillor's A
Prairie Home Companion radio program, is a prolific songwriter.and it's a
good thing. As the result of a fateful lighting strike on the studio where
he was working, Brown lost the recordings that were to comprise his next
album. For most artists, losing that much material would have been a
creatively scarring and demoralizing experience. For Greg, it was just an
excuse to turn inward once again, and write more songs. Of the songs that
came to comprise his 24th album Freak Flag, being released May 10 on Yep
Roc, the title track is all that remains of that ill-fated lost original
album. Greg wrote ten new songs, moving on to record them at Memphis,
Tennessee's legendary Ardent Studios. This time there were no storms, but
creative lightning did strike again, resulting in what many have called Greg's
best album. Like a jagged stone worked by ocean waves, Brown's signature
rough hewn-yet-velvet-smooth baritone is in fine form on Freak Flag.
Produced by Bo Ramsey, the album also includes a cover of Brown's wife Iris
Dement's "Let the Mystery Be" and Brown's daughter Pieta's song "Remember
the Sun."