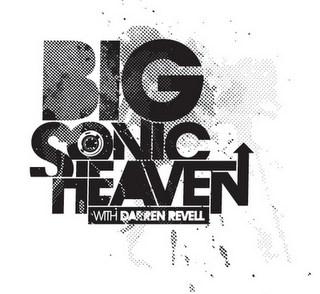 From 1995-2003, Darren Revell hosted Big Sonic Heaven on 96.3 FM in Detroit. The show was the first I had ever heard of that was basically 'Appointment Radio'. Wherever you were, whatever you were doing, on Sundays at 10PM that radio better be tuned in.
Cutting edge music junkies revelled in the mix of Ethereal Dreampop, Shoegaze and Britpop. It was the only show where you could hear classics like New Order, The Cure or The Smiths and learn new must-have bands every week. I still owe many parts of my collection to a late Sunday night discovery (Gene, Mandalay, State of Grace, Club 8, Poe). Darren even gave some love to some hard working and spectacular local bands of the era (Ether Aura, Au Revoir Borealis, Ethos, Majesty Crush, Velour 100).

It was a crushing blow to FM Radio in Detroit, and music fans alike where Darren left town for the West Coast. In the years that followed, there were many shows inspired by Big Sonic Heaven, including Aural Bliss on Auralgasms Radio, Sonic Bliss on Q101/107.1 FM and Star Sail on WXOU. There were local club nights like Atmosphere, Sugar Hiccup, Big Sonic Sunday and more recently, WOW Wednesdays at Gracies Underground and Happy Endings at Berkley Front. All of these shows and events attempted to carry the torch of underground music to the people as Darren did during those 8 years.

Darren continued his Big Sonic Heaven broadcasts for Indie 103.1 in LA until October 2008. His fans in LA and Detroit have wondered what was next...and now we know!.
Darren is bringing Big Sonic Heaven to Strangeways Radio! The station, launched July 18, is currently broadcasting 24/7 and compiling an impressive list of cutting edge and influential talent, including Zumby and Mikeylove (formerly of Aural Bliss) and Nathaniel Cramp of the successful UK Shoegaze label/club night, Sonic Cathedral. Adding Darren to the stable, is quite a coup for all involved. More DJs and shows are being announced seemingly weekly, with some more exciting forthcoming names from the Detroit DJ scene.
The premiere date for Big Sonic Heaven will be announced soon. Stay tuned to http://www.strangewaysradio.com/ and the Facebook fan page for details.
Posted up by Zumby on 31.7.10