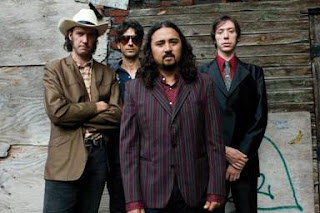 The best live band you’ve never seen (unless you’ve seen some of their friends, including Neko Case or Jenny Lewis live) are coming to the Pike Room at the Crofoot in Pontiac Aug. 19.

If Darker Circles is about anything, it’s about improving on past successes. But, that’s been a theme for The Sadies since day one. From the foreboding “Cut Corners,” which evokes the band’s good friend and fellow Canadian Gordon Lightfoot, to the jangling Sweetheart of the Rodeo-esque lightness of “Postcards,” The Sadies’ maturation is apparent here, just as a fine wine gets better with age. In one turn as heavy as a sledge, and on the other flitting across melodies with the ease of so many sparrows, The Sadies prove once again that denying them now is simply prolonging your conversion. So go on, pull up that screeching wooden chair that bows with your weight. Slide it up next to the turntable and drop the needle, The Sadies are a sure thing….tomorrow isn’t.
Get tickets here