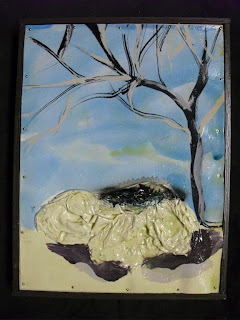 "Rather than saying which style, trend, movement or period we fit; let us say we indulge

in whatever strikes our fancy." The Slippery Weasel Society, 2005

The Slippery Weasel Society invites the public to view an exhibit of recent works made by seven of their members. This exhibit takes place at the Cass Cafe, 4620 Cass Avenue, Detroit, Michigan. The show opens with a reception on Saturday, November 5th, 7 – 10 pm, and runs through Saturday, January 7th. Participating Weasels include Jeanne Bieri, Carl Butler, Treena Flannery Erickson, Mary Fortuna, Matthew Hanna, Andrew Krieger and Faina Lerman. The opening reception will feature a stellar line-up of Weaselesque musical performers, including The He Bops, Michigan Kids, Nate Brent and Ben Teague.

The Slippery Weasel Society is an artists' collective centered in Detroit, Michigan. They have exhibited their work as a group since 2005 at Paint Creek Center for the Arts, the University of Toledo Center for the Visual Arts, Bohemian National Home, The Scarab Club, Anton Art Center, and at Popp's Packing. Their exhibits may take the form of group gallery shows, collaborative installations or events including hands-on workshops, camps, metal pours and performances. Members participating vary with each event. Membership has grown with each exhibit, to include curators or others associated with each venue.

Though the origins of this secretive fraternal organization are shrouded in mystery, its antecedents can be found in several Native American Medicine Societies of certain Great Lakes tribes. The first mention of the society can be found in H.R. Schoolcraft's "Algic Researches" of 1839, where in Pauppukeewiss, a "crazy brain", likens the slippery weasels in his lodge to a "sack of fish" and wishes them good luck in surviving the harsh winter. (La Poudre, Historical and Statistical Information Respecting...the Indian Tribes of the United States. Mentor L. Williams, Editor.)

The society not only managed to survive, but thrived. During the war years it claimed the largest number of furniture movers among its ranks of any other civic organization of its kind in North America. Though interest waned at times, the society has enjoyed something of a renaissance during the ferret boom of the mid 1990's. Today Slippery Weasels are everywhere. Membership is up, and council meetings are more egalitarian. Due to multiple lawsuits in the early part of this decade the Society has been forced to open its doors to women, dancing bears, and the Irish.

Whatever the truth of their origins and activities, lovers of art and projects and music and mustelidae of all stripes will find something of interest in Seven: Slippery Weasel Society Exhibition. Whether your tastes run to painting or sculpture, found objects or fabrications, tall tales or giant snakes or pure obfuscation, you are sure to find something to suit your fancy. We invite you to be our honored guests, to raise a glass, nibble a snack, tap a toe or gaze upon the sublime beauty and sheer audacity of an authentic Weasel Project, in celebration and fellowship with your Weasel brethren.