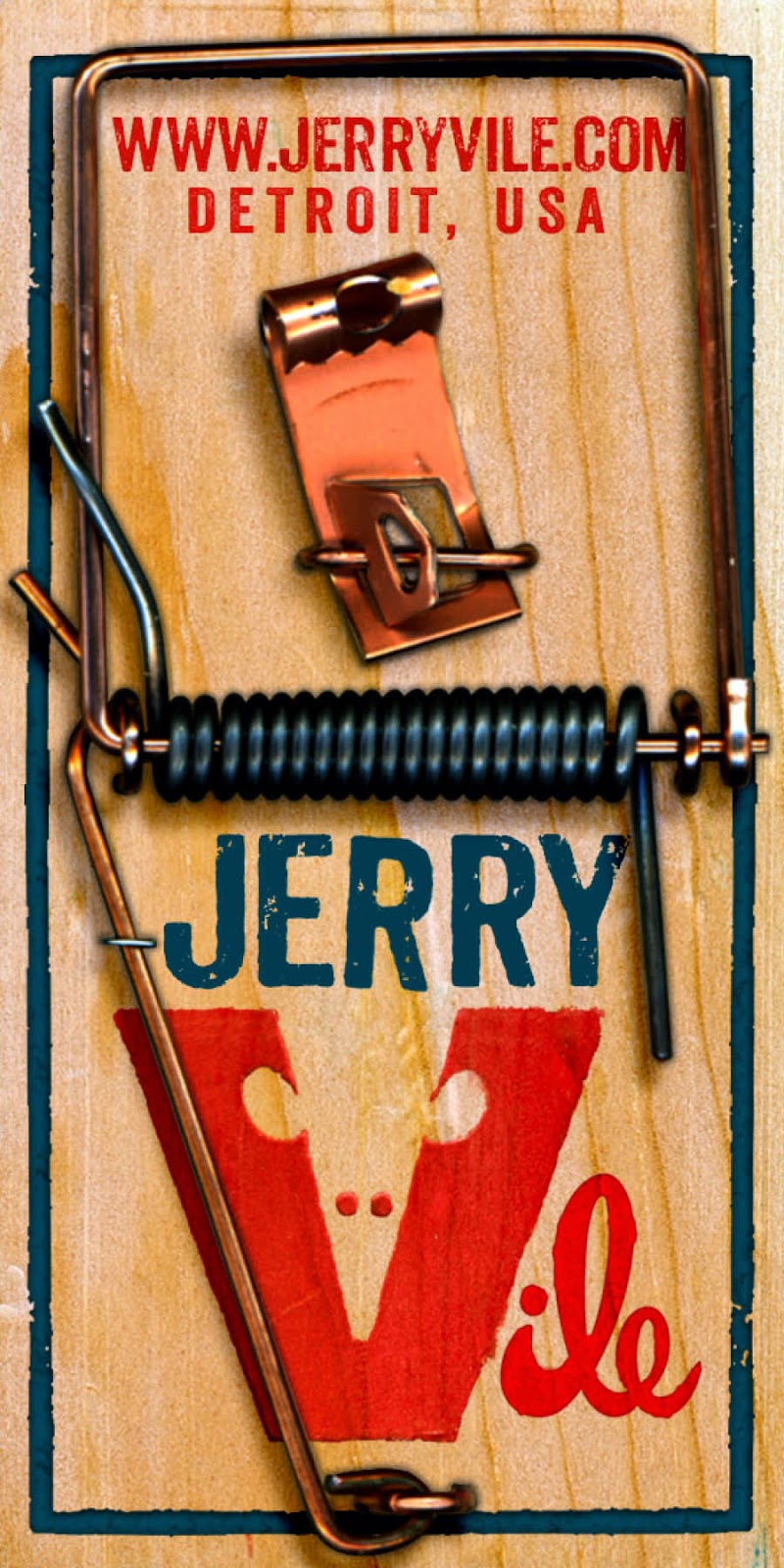 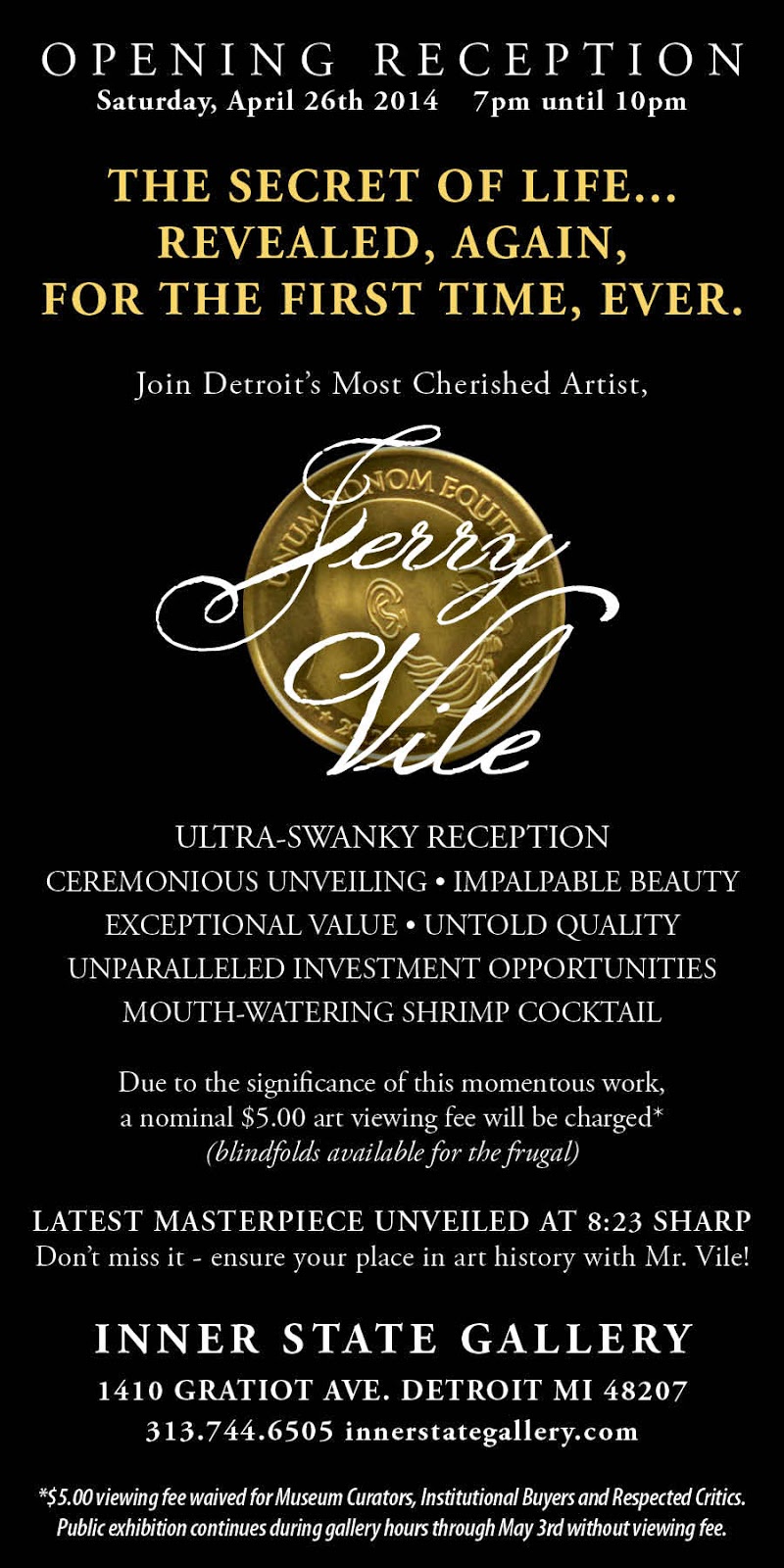 Jerry Vile art openings are as much about the performance as they are about the art on the walls; which itself can also be as much performance as it is painting. It’s art that at first glance may repulse you, it actually grows on you like a favorite song. You can experience for yourself, at his art reception for “The Secret of Life…Revealed, Again, For The First Time, Ever. The date is April 26, 2014, and it takes place at Inner State Gallery located in Eastern Market at 1410 Gratiot Ave Detroit, MI.

Just voted Detroit's Best Painter by Metro Times reader’s, Vile’s paintings lay somewhere between delightful and disturbing. Misshapen heads, often creepy faced children or cute little animals, likely scared and screaming against landscapes that border on the abstract. Surreal is not a stretch, but low brow expressionism might be a better label. Imagine Max Fleischer as interpreted by Edvard Munch and repainted with the sloppy abandon of a Ralph Steadman. Virtually every piece is accompanied by a write-up, artist statements or ramblings of lunatic journalist (he cut his teeth publishing), they can be as surrealistic as some of the subjects or as crass a sales pitch as from a pushy telemarketer. They remind us that Vile is a just as much a writer, actually a satirist as he is a visual artist, maybe more so.

Videos, sculpture, taxidermy, miniatures, spoken word, (and/or actual performance) collide in flea market of contrasting mediums and styles. It's often tongue and cheek with other body parts thrown in (he is after all, the creator of Detroit's infamous and massive X-rated art spectacle, The Dirty Show®) Which provides a great lead in to his most well known work to date, The Crisco Fist. As a public art piece, The Crisco Can received more attention and accolades than any art piece in Detroit's recent history. Along with his Selling Of Detroit, which included a team of artists hanging sales signs on Detroit's more famous monuments and landmarks (as well as a hilarious ad in the weekly alt-weekly, The Metro Times) has given the former publisher and punk frontman a new stage to befuddle the masses. It's pure Detroit agitprop, and it struck a nerve with a city in the those of bankruptcy. They were visually arresting, humorous, surprising and above all, strong statements. Vile that also won an award for Best Public Art a Reader's poll in that same alt weekly’s poll.

As far as this show we are just as much in the dark as anyone. It's called The Secret Of Life…Revealed, Again, For The First Time, Ever. Vile describes it as "a Back To The Future type opportunity to change the past in the upcoming future which by then will be the present". He insists this show is his first step of becoming "The undisputed kingpin of Detroit's art racket."

Clearly unclear, is it art or a satire of art? Does it matter? This much we know. There will be video, paintings, sculpture, pompous unveiling, and shrimp cocktail seems to be his biggest concern, We just hope there will be plenty of Crisco on hand.
Posted up by DC in Detroit on 15.4.14