Interview with Leopold and his Fiction 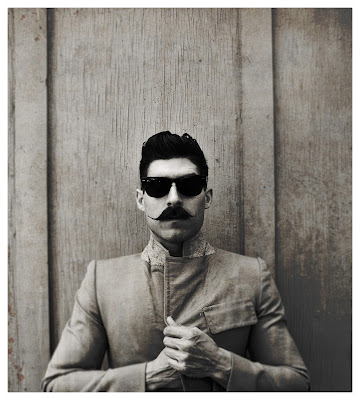 I had the chance to chat with Daniel James: lead singer and guitar player of Leopold and his Fiction after a show at the New Way Bar in Ferndale a short while ago. Their music is a blend of modern blues rock and soulful Motown R&B with a touch of dark Americana. Trying to pinpoint where they stake their claim and you'll find a few different cities- San Francisco, L.A., Austin and Detroit. Leave it at- they're on the road, with 200 plus shows a year.


CV: I read you're from Michigan. Born and raised?
Daniel: Yes born in Detroit. Lived all over ferndale, southfield, royal oak, detroit, Until I was 20


CV: When and what made you move?
Daniel: 13 years ago. California.


CV: Anything to do with music?
Daniel: I wasnt playing much in a band before 22, but I moved to los angeles at 20 and as soon as i moved to SF at 22 i started Leopold and his Fiction. and i'm stubborn and excited enough to still have it as my true one and only.


CV: Also, people usually have unique reactions to someone saying they're from Detroit, any experience with that anywhere along your way?
Daniel: All the time. all the time. its immediate street cred but its laughable, because they don't know what its like. most people get their information from the televised news and Robocop. most people will never know what its like.

CV: With Leopold and His Fiction and touring, have you returned to play Michigan or Detroit since having resided here?
Daniel: In the past 12 years Leopold has played in Michigan about 6 times.


CV: Any particular bands, places or people you have fondness for here?
Daniel: The entire MOTOWN catalogue, specifically Stevie Wonder's 1968 album, "For Once In My Life". He was 18. i cant believe it. The song, "I Wanna Make Her Love Me" in my opinion is one of his best recorded performances ever. As is, "I Don't Know Why"

there a million and a half others too. i tried so hard to be inspired solely by all the places I moved to but the longer i was away from Detroit the more i realized it inside of my songwriting. There isn't a song we write nowadays that we don't ask, "What would they have done in Studio A?"


CV: What's to come from the band in the near future? Upcoming studio time or anything?
Daniel: We are wrapping up our 4th album in Austin, Texas. should be out pretty soon. Glad to be coming back to Detroit more often as we are touring 200+ dates a year.