The Divine Sister is currently at the Ringwald Theatre in Ferndale, Michigan.  This is a delightful spoof on every Hollywood film involving nuns complete with a stigmata scene, cheery yet sardonic songs, a ton of sexual innuendos, an abundance of orphans, and actors dressed in drag. Highlights included a joke involving a bicycle pump, rubber cement, and Purina Cream of Wheat, a fondness for kosher pickles, bashing on the Dave Clark trio, and a tale about a trip to Crete Island involving a cuddle fish, a Bill Blass suit with a wide collar, and a airy turquoise negligee. Most of the performers had more than one role and this added to the zany off kilter charm of this production. Please visit http://www.theringwald.com/ for more info.

On 5/28 a Missouri band HA Ha Tonka played a delightful blend of appalachia, folk, indie, bluegrass, and country music. Biblical and literary references, intuitive and colorful storytelling about the economic and cultural realities of the south, four part harmonies, robust ever present twang, and a sprinkling of dry sharp humor made this performance rich and rewarding. The band is obviously close knit. They resembled brothers poking and joking with each other. They had a candid, pleasant and dynamic stage presence. The crowd was filled with an especially cheerful college indie crowd and some older NPR listeners. Lots of smiles and merriment.

Langhorne Slim from Pennsylvania craft songs about temptation and redemption. Slim is a blend of  Irish and English folk, bluegrass and indie rock. They sound like a gentler Pogues. At times the singer does sound a bit like a bluesier Robert Plant.  Slim toured with Trachtenburg Family Slideshow Players previously and has a song that was chosen as number 5 on the Rolling Stone editor's top ten picks. A lovely cover of The Verve Pipe's The Freshman, the charming and at times spastic banjo playing, and one song with lyrics about various hair colors, a picnic, eating a peach at the seaside, and sensual thigh feeling were grand moments. The crowd was dancing, happy and appreciative of the songs and charismatic singer in the alpine hat with the dramatic buster keatonesque eyes. 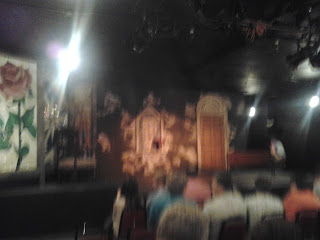