"Snazzy is as Snazzy Does!"
Gwen Joy is an artist who specializes in colorful folk art paintings.
Life experience is her subject matter which is translated in a lyrical/mythical fashion.
Follow Gwen's snazzy street reviews weekly here on MCB
Reach her directly at www.GwenJoy.com
On Saturday I stopped by Jerry Vile's humorous exhibit at the Bankle building. A white plaster pope statue with nude dolls decorating its derrière,a reclining bronze nude male statue, a bizarre and hilarious wizard of oz themed film staring Jerry Vile, a quirky bunny and mouse themed food arranging style, and a collection of Jerry's fun and spastic (in a very good way) paintings. The Detroit public only had one night to take all this in! I was intrigued by Jerry's candid titles and rambling descriptions for these pieces. He had no prices next to anything! Someone later told me he had all the prices in his head and he made an analogy to his show being like an Albanian garage sale. Back when Mr. Vile produced Orbit magazine he had an issue where he staged a fake garage sale with stained and sweaty socks lodged in a bbq, ridiculous prices, broken stuff, porn and other delights. His endeavors always are fun and innovative! Keep the fun coming. Next I attended Language, a art show curated by Satori Circus at Rivers Edge Gallery in Wyandotte Michigan. Artists include Taurus Burns, Andrey Pongracz, Shades, Ryan Weiss, Angela Topacio,Topher Crowder, Christopher Fick, Lushes LeMoan, Luke MacGilvray, Thomas Pyrzewski,Clarence Moses, Aunia Kahn, Marcus Christy and myself. A few burlesque performances stimulated the attendees. Satori Circus did an act involving rorschach imagery. How these rorschach images were produced was the entertaining part. Lets just say his derrière and forehead were principle players in act. Christopher Fick's painting "Godmother's Midnight Pumpkin" cleverly fuses a fairytale icon and a muscle car. Marcus Christy's vibrant painting "Mystery Girl" is a celebration of the female form. The skin tones sizzle. Beautiful warm color palette. This exhibit is full of unique and expressive pieces. The show will be up until June 11th. Visit http://www.artattheedge.com/ for more info. 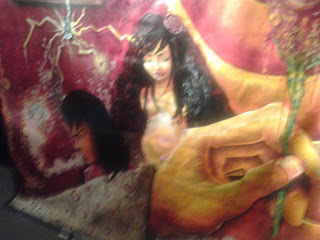 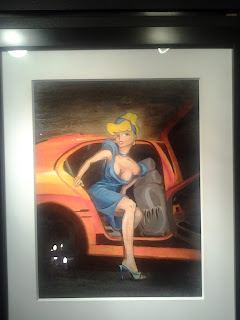 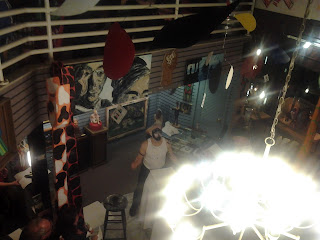 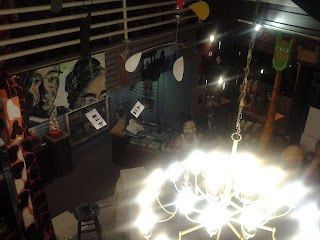