INTERVIEW: Colleen Caffeine- Author of "Adventures In Cuntopia: The Life Of A Punk Rock Prom Queen"

If you have any part in the Detroit music scene, then chances are you've run across Colleen Caffeine. If you haven't seen her in one of her three bands (Choking Susan, The Whoremones, AngelFuck), then you just may recognize Colleen as that striking woman with lots of tattoos and colorful hair rocking out to one of her favorite groups. She'll be the one with the larger than life personality that easily stands out the most in a full bar.

Sexy, flamboyant and hilarious female punk rock singer-songwriter Colleen Caffeine started out as a forgotten, overweight, confused and sheltered child born in troubled and destitute Detroit. In spite of it all, she has managed to live out her teenage dreams of playing in clubs and festivals all over the world in the band she created, Choking Susan.

Fueled by her passion for punk rock and unusual life, she has written, performed and recorded hundreds of songs in the United States and internationally. She taught herself bass, becoming an award-winning bass player. Be entertained by her wacky mind and interesting take on life by reading about her journey, her good luck, crazy times and insane romances. When there’s nowhere to go but up, that’s where you go. 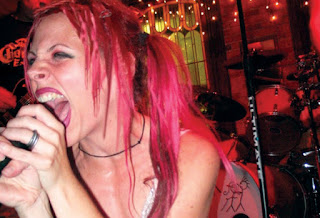 Colleen Caffeine can now add "author" to her repertoire as she has just released her autobiography entitled "Adventures In Cuntopia: The Life Of A Punk Rock Prom Queen".


MOTORCITYBLOG recently had the opportunity to pick Colleen's brain about the new book and here are the results...


MOTORCITYBLOG: How did this idea of writing a book come about?
Colleen Caffeine: I was bitten by the writing bug when I was a child in elementary school but was told by a teacher that I sucked at it so I never pursued it further. Little did I know that she was probably just jealous of my big boobs and I could've been a great writer so now you are all stuck with this me, chronic whiskey brain and uneducated fingers. I wrote this book on the suggestion of my friend Angel who works at a publishing company, my publishing company Ellora's Cave. Her boyfriend Scot has been a fan and friend of my band Choking Susan and has heard me tell tales of my ridiculous life. They both thought others might want to hear them too.. so I wrote!

MCB: Can you give us a overview of the book?
CC: It's about growing up poor and all the funny things that happen in lifelong dysfunctional relationships. I talk about my experiences traveling the world in a punk rock band with crazy stalkers and the rock heroes I've met. I talk in detail about pain and the experiences with people that fucked me over and the stupid things I've done. It's about life...yours, mine and theirs. 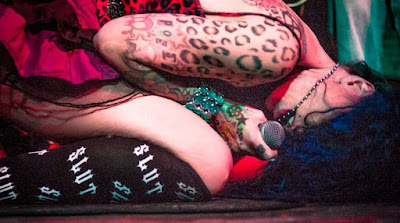 MCB: Your band Choking Susan will be performing at the for the Rebellion Punk Music Festival over in the UK in August. You are also booked by yourself on the literary stage alongside notables Jello Biafra,  Captain Sensible, and Slim Jim Phantom. Will you be reading selections from your book at this?
CC: I will be and will also be interviewed on that stage. It's quite the honor and I'm so grateful for that! To be in front of the very people that started punk rock and the ones that love it is an incredible accomplishment and responsibility. I'm just a Detroit girl, a fan of punk rock that didn't stop. 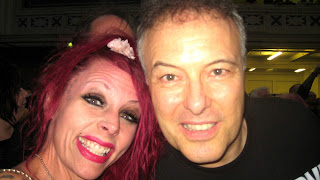 MCB: Does this transition from musician to spoken word artist feel natural to you?
CC: I think its one in the same really. It's the quieter version.. wasn't punk rock widely about change and getting a voice out there? It's the voice without the music.

MCB: You also have a book signing coming up in June at Paperbacks & Things in Westland. Do you plan on doing more book signing appearances and events involving the book this summer?
CC: Yes..I plan on being at every book store in every state everywhere in this and everyone else's country! Will I make it there? we'll see :)

MCB: Do you have a favorite autobiography from a musician?
CC: I'm the biggest and bestest Ramones fan ever so I like and have read everything written by the Ramones, dead or alive and everything anyone relating to them has written :) 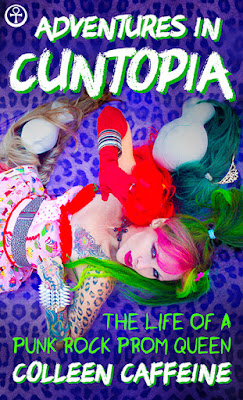 You can pick up a copy of "Adventures In Cuntopia: The Life Of A Punk Rock Prom Queen" by Colleen Caffeine at her upcoming book signing at Paperback & Things on Saturday, June 25.
She will be there from 2PM-5PM. Paperbacks & Things is located at 8027 N Wayne Rd. in Westland.