UPCOMING (Sat. June 18): DIME for a DIME at Detroit Institute of Music Education 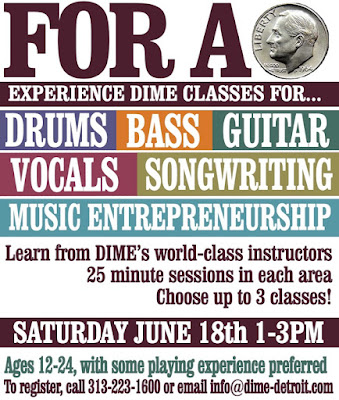 DIME for a DIME will allow you to come and experience mini-lessons from some of
DIME's amazing instructors.

Instructors include:
- Antea Shelton (Songwriting): As a part of the A-Plus Songwriting Duo signed to Universal Music Publishing, Antea has written songs for artists including Beyoncé, Justin Bieber, Jennifrer Lopez, Mary J. Blige, and so many more.

- Scott Guy (Music Entrepreneurship): Scott Guy has worked for years as a heavy hitter in the industry working behind the scenes with artists including U2, Soundgarden, Eminem, Janet Jackson, and countless others.

- Elise McCoy (Guitar): Head of Recruitment & Admissions at DIME, Elise McCoy is a Wayne State alumni and is well known throughout the Michigan music scene as the lead singer and guitarist for the heavyweight rock band MPV. Having appeared at SXSW and CMJ, opening for acts including Third Eye Blind and Electric Six, she now tours with American Idol finalist and Original 1265 artist Jena Irene Asciutto while continuing to write and record her own original music.