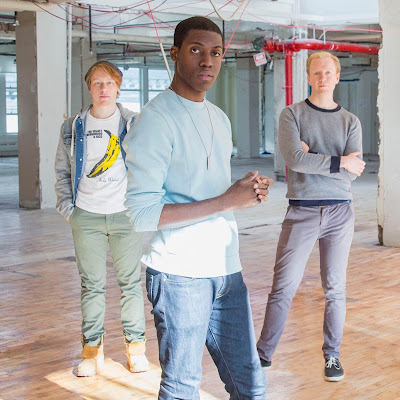 Indie Soul/R&B group THE ROOKS from New York City are performing
at PJ's Lager House in Detroit this Wednesday (June 22).

Local acts Taxon Clade and J. Walker & the Crossguards will be supporting acts.


If you happen to ask The Rooks about their sound, chances are they’ll mutter some blurry portrait of Frank Ocean, J Dilla, and the Talking Heads getting drunk at a dive bar in the year 2023, while Justin Vernon waits in the car to drive everyone home. Push them to be a little more specific (and a little less confusing), and they’ll tell you that The Rooks are equal parts kick-back, head-knock, and get-down; the music you rock to at the party, and the perfect soundtrack for the ride home.
A transplant from the Wesleyan University music scene, The Rooks have spent the last three years and change making noise across New York City and the greater Northeast, gaining substantial recognition for their debut EP, Something You Can Take (May 2013), follow up single “Twister” (Jan 2014) and most recent releases “Secrets” and “Intermission (Wires)” (both premiered on Okayplayer).

Hard-hitting performances at Irving Plaza, Mercury Lounge, and Brooklyn Bowl, as well as highly successful residencies at Arlenes Grocery and Pianos NYC (second highest grossing residency in venue history) have earned them further acclaim, including Deli Magazine’s Artist of The Month award (Feb 2014) and recent nomination for the 14th Annual Independent Music Awards in the R&B/Soul category, finally providing their parents with a tangible means of bragging about their children. The Rooks happily released their latest EP Wires on Afropunk, previously releasing two singles from the record on Okayplayer.  The group also won an Independent Music Award for "Secrets", the first single from Wires, and spent the first half of 2016 performing concerts up and down the east coast.They would love for you to join the party, because they’re having an incredible time!
https://www.facebook.com/TheRooksBand

Taxon Clade resides in the heart of Midtown Detroit as a dancey-coustic soul pop trio. Playing shows from official venues to festivals or house parties, they're there to keep the party moving. The sound is influenced by your favorite aspects of My Morning Jacket, The Red Hot Chili Peppers and Motown music. Bring your dancing shoes, if you plan to prepare appropriately.
https://www.facebook.com/TaxonClade

J. Walker & the Crossguards: J. Walker's sensibilities for gnarly soul, fuzzed-out funk and punk gets kicked up here by the brass and bass of a cookin' Beehive-built band. These three songs augment Walker's awareness of guys like Lou Reed, Danny Kroha, Sly and Mick Collins. Or something. Walker's taste, though probably best tagged between the funk and the punk, go everywhere, really, (just like his guitar shredding).  --Jeff Milo, Detroit Metrotimes
https://www.facebook.com/JWalkerTheCrossguards