at PJ's Larger House in Detroit 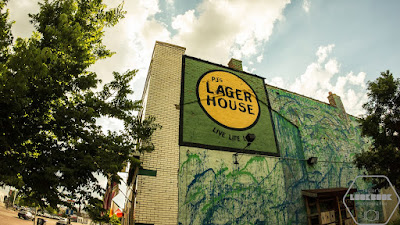 I find myself at the edge of Corktown a tad bit confused of the current status that is PJ's Larger House. If you search up the Larger House you get as followed: "Enduring bar serves handmade burgers & New Orleans-style Cajun grub with a side of live rock music."

Once inside, I was engulfed with Irish and Rock memorabilia attached to the walls of this "New Orleans-Style" place. Even with their menu I question for that Cajun vibe I would get as I settled for a Irish twist of a reuben labeled"Corktown Classic". For those who were curious on that, I gave it a 5/10. I should note I'm a tad bit picky when it comes to my reubens. The meat was on thick side and tough and I wish I had more then two bits per side. It was good for a bar sandwich not a main dish. Normally, I arrive four hours earlier just to avoid crowds but I found myself at ease knowing that I could enjoy that sandwich (As I had arrived around Six-Thirty) as I wait underneath the Lager House where the boys are expected to perform. Little did I know that doors open meant when they will actual arrive to do sound check, I could have arrived much later than I had and possibly gotten something good on my way here. 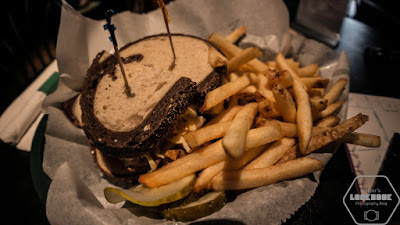 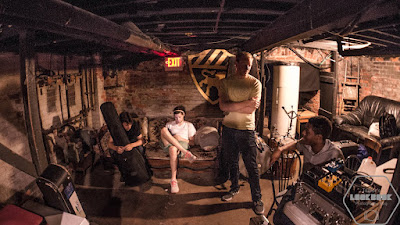 The Lager House performance area is what could be considered the living room in a duplex house, where the stage sits next to one of the exits allowing the band to bring in their equipment. I didn't see any action in that room until little over the time "Doors Open".  In that I mean, where the band actually brought in their kits to do their first soundcheck.
Around nine, the bands had arrivex and I was introduced to The Rooks by Saxophone/Keyboardist Spencer Hattendorf downstairs in what the Lager House called their "Green Room". The band had a friendly since of charm to them, very pleased at the idea of someone photographing their band. Even Garth Taylor (lead vocals) who was quiet at first jump in the conversation with talks of trying to meme himself in any photos of tonight's show. Only sad part of the conversation was their eleven o'clock time slot. Until then, the conversation was mostly small talk about myself, bands, The Onion news article, and Tumblr. 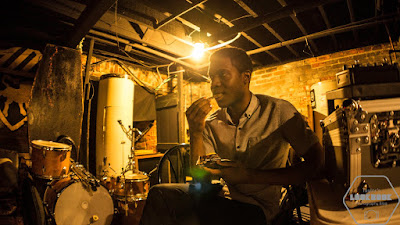 In the meantime, opener Taxon Clade lead vocal Daniel had already remove his shirt two songs into his set. (I should take the moment to mention that the crowd consist of the openers and The Rooks. A very intimate concert. So the need to be shirtless wasn't really necessary.) So if that gives you a vibe of what their band is like then I really don't need to describe them. If you still need more information, they did two covers the first Freaky Nasty "When I dip you dip" the other campfire tradition Elton John's "Rocketman". After their show, the next act switch from the floor to the stage. 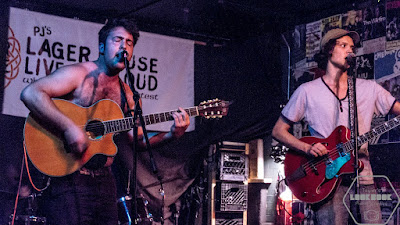 J. Walker & The Crossguards kept the energy going as did the coffee that I had received from Spencer. Their no shoe policy on bass player Kylie gave them a bit of an edge as they continue their rock and soul style. The band brought in a few Tiger fans who were watching the game from the other side of the duplex building. I couldn't help to find myself questioning why a great group like this was at a bar where, at one point, was being viewed by only the bass players girlfriend and myself. A little brush up on performing and better tuning could give J. Walker & The Crossguards a great shot into a better atmosphere. 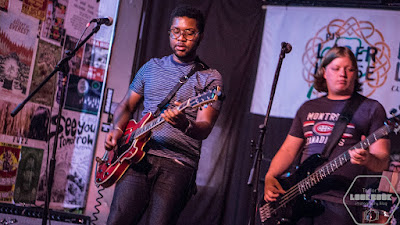 We finally inch over to the final act...The Rooks swifty traded spots and were ready to rock. I had previously spent a couple days listening to their music (Which can be found on Spotify and bandcamp) so I knew what I going to witness.
What they call a muddy down version of Frank Ocean and they were right. Was I expecting a cover from said artist? Yes. Did I get it? Yes. They could be performing in front kitchen staff and still act as if they were performing in front of a sold out audience. That is a type of a band I could put my trust and t-shirt money to. 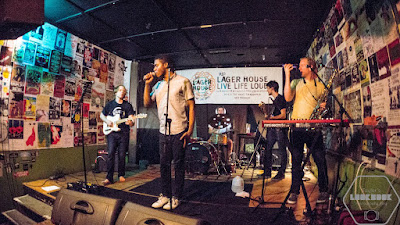 Now in terms of what I could use to describe them myself... I like to picture the perfect combination of the R&B old school Babyface mix with the Robin Thicke "Love After War" version. Overall experience... I recommend checking them out while they are still on this small tour. They may not be signed, but it's only a matter of time before that happens. Good luck on the rest of the tour boys. 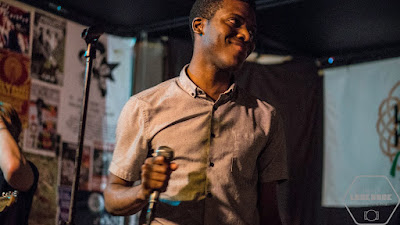 To see more photos you can check out my photography site.