UPCOMING (Thur. July 7 and Fri. July 8): "The Wizard of Odd" at the Tangent Gallery & Hastings Street Ballroom in Detroit 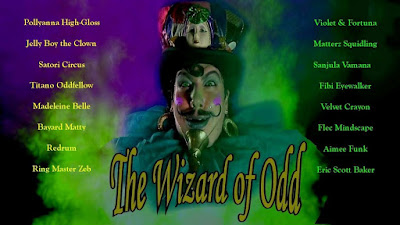 Things in Detroit are about to get really ODD this Thursday (July 7th) and Friday (July 8 )
as The Squidling Bros. Present
"The Wizard of Odd"
A theatrical retelling of an iconic American story.
Directed by Matterz Squidling and Mackenzie Moltov/

Show synopsis:
The worst storm in the history of Detroit comes through whisking two young boys, Donny and Tommy, off to the magical land of Odd. Where everyone becomes who they truly are. Donny transforms into a young woman Dorothy Gale and Tommy transforms in his best friend, Toto the dog. Dorothy's apartment lands on the Wicked Witch of the East. She becomes the hero of the people of Munchkin land and is sent on a journey to meet the Wizard of Odd, to find her way home.

“The Odditorium“ was once a magical freak show that traveled across the land with a circus run by a mysterious wizard that no one ever met but everyone loved and respected for taking care of the freaks.

The Wizard's show consisted of three stars, the Tin Man, the Scare Crow, and the Lion. There were also lesser paid, filler members of the show referred to as “Munchkins”

At the height of the show’s popularity the Wizards older twin sisters, The Wicked Witches, joined the show and took their brother's profits. Casting a spell upon the Odditorium. Ticket sales plummeted and the sisters abused the members of the freak show and manipulated their younger brother out of his job.

The gang breaks up and the wizard abandons the show, going home to his younger sister, Glinda. The wicked sisters are happy and start their own show, using the name of their brothers successful show replacing all the performers with their flying monkeys.

Dorothy and Toto go off to see the wizard and meet new friends The scare crow, the tin man and the lion. Their bond of friendship defeats the evil Wicked Witch of the West and her army of Flying Monkeys. Through this journey they find out who they truly are and bring peace to the Land Of Odd.
Posted up by Casey on 27.6.16