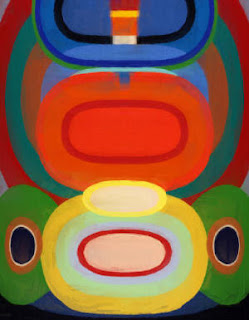 “It is an onslaught of copycat and mechanical mediocrity.”
– Jerry Saltz, Zombie on the Wall, June 2014

DETROIT – Galerie Camille is being forced to make artistic lemonade after being thrown the ultimate art-world lemon: all of the spanking new paintings created exclusively for the gallery’s Zombie On The Wall Show by Jef Bourgeau, have been outed as fakes.

Years ago that would have been an embarrassment to conceal, but this new Detroit gallery is embracing the fraud.

“One of our goals, other than selling art, is to educate our audience,” said David Chow, the gallery director. “You can learn a tremendous amount by looking at an object that is not quite right. For the public, it can seem like magic that one is right and one is not. This work demystifies that process.”

The phonies — dozens of paintings on canvas and prints on paper created by Detroit artist Jef Bourgeau— will still go on sale for the gallery’s exhibit on June 12th as if duplicity no longer matters in the world.

“There are a couple works that are too good to be true and a few that are so bad that I can’t believe anyone will take them seriously,” said Edna Pruett, a fiery redhead and local college curator who questioned their origins from the start.

"They aren't true to form, but mere simulations of art," said Edna. "Bourgeau has used computer software to go through all the motions in a few meager minutes that a real artist struggles over for weeks, months or even years."

Chow tried to shrug off the growing controversy: "It’s totally absurd. The show hasn't opened yet and your so-called experts haven't even viewed the work in person."

When polled, a nearby gallery owner reacted with the ultimate thumbs down. "It's bathroom art," said Robert Mann, in a twitter exchange with this reporter. "Nowadays the computer can generate anything, even crap."

"They're the ones tapping into artificial intelligence and pulling flimsy critiques out of the air," Chow reacted bluntly. "How can an artist fake his own art anyway?"

"That's obvious enough," Edna countered, "because he's a fake artist. His technique is not his own, but the instant by-product of a computer program - in conspiracy with an ink-jet printer and some canvas remnants."

Other noted experts have since confirmed that Bourgeau's "paintings" may indeed be counterfeit.

"They don't have the tactile depth and signature strokes one would find in a real painting," agreed Carlos Reed, director of the city museum. "All these properties are indeed imitated onto the canvas, but, when viewed in person, they will surely reveal themselves as flat, lifeless and ultimately unreal."

If given the opportunity, what would Ms. Pruett say to the artist?

In a century where much of new art is up for grabs, David Chow continues to insist that they do.