The Cinetopia International Film Festival came to a close for me this past Friday where I viewed three films in Ann Arbor.
The first two film screenings took place at the Michigan Theatre.
First up for the evening was the film Tab Hunter Confidential. 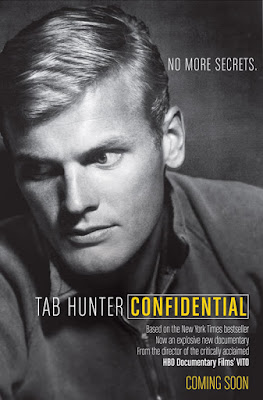 This documentary is about the legendary actor/singer Tab Hunter and is adapted from Hunter's 2005 best-selling memoir of the same name. The audience gets first-hand, revealing accounts of life under the limelight and behind the curtain from the entertainer, while smartly weaving in rare archival footage, and intimate accounts from the likes of George Takei, Debbie Reynolds, and John Waters.
Tab Hunter was a sensation in Hollywood's Golden Age. He had to keep his homosexuality a secret in a time when it meant penalties as severe as jail time if he was exposed. This documentary was fascinating and covered Tab's love affair with Anthony Perkins, his arrest in the 50's, admitting his Mother to a mental institution, his passion for horses and ice skating, his Brothers death in Vietnam, his relationship with co-star Natalie Wood, and much more. 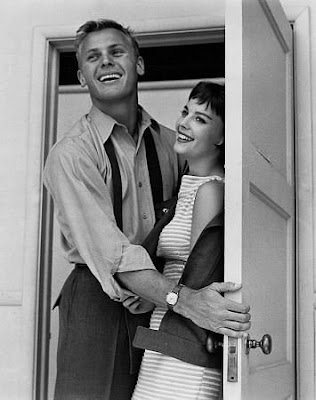 Tab Hunter was the impetus for the creation of Warner Brothers records in the 50's. Although Hunter was signed to an exclusive acting contract with the studio, it did not prevent him from signing a recording contract, which he did with Dot Records. Since Warner Bros. had no label of its own at the time, they create done so they could cash in on Tab's success with the label.
Tab eventually paid out of his contract with Warner Brother's because he wanted to have a say in the projects he worked on. It ultimately cost him great success as he never reached the heights he had with Warner Brothers after that. His did revive his career in the 1980's, when he starred opposite actor Divine in John Waters' Polyester and Paul Bartel's Lust in the Dust.
Tab eventually retired from acting and considers it his "former life". He's quite content living his life with his dogs, horses, and his partner of 30 years, Allan Glaser.
After the screening Tab Hunter himself took part in a Q&A via Skype LIVE from his home. Looking great at 83, he was quite obliged to chat with the audience. 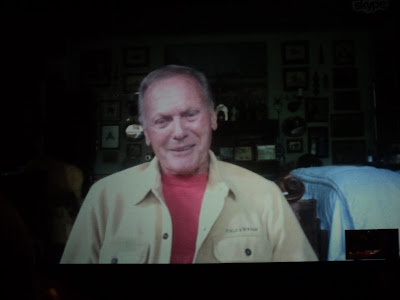 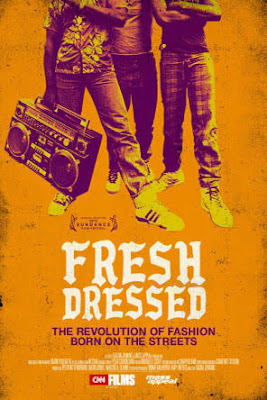 My second film screening of the night was Fresh Dressed. This documentary covers the history of urban fashion from its start on cotton plantations to its spread to corporate America.
Fresh Dressed is a chronicle of hip-hop, urban fashion, and the hustle that brought over sized pants and graffiti-drenched jackets from the streets to high fashion's catwalks and Middle America shopping malls.
Director Sacha Jenkins film draws from a rich mix of archival materials and in-depth interviews with rappers, designers, and other industry insiders, such as Pharrell Williams, Damon Dash, Karl Kani, Kanye West, Nas, and Sean "Puffy" Combs. Even old school hip hoppers Kid 'n Play are interviewed and give great insight on the uprising of street fashion.
Fat Laced Adidas, FUBU, and Cross Colours are just some of the phenomenons covered in the film. There's also the gentleman who could wear a different sneaker from his collection everyday of the week for 7 years and still not wear everyone he owns.
For a old school hip hop lover who use to breakdance in the 80's, this documentary took me back and it was a fun 82 minute ride. 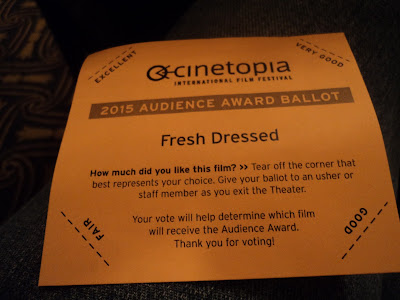 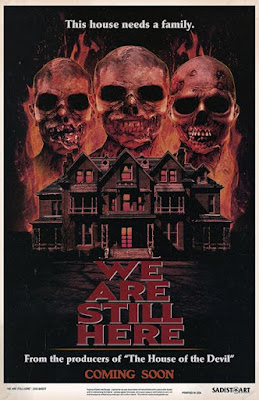 I walked over to the State Theater for my last screening of the evening. I met up some friends who loved horror films to take in a screened up We Are Still Here. A warning at the ticket counter cautioned that the film "Contains Violent Content". That's exactly what I was hoping for going into this one. 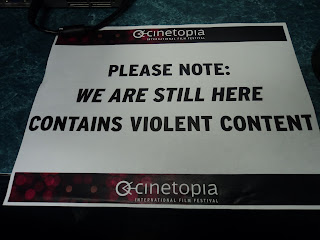 The film is about a couple who moves into a quiet New England countryside to try to start a new life for themselves after their son is killed in a car crash. But the grieving couple unknowingly becomes the prey of a family of vengeful spirits that reside in their new home. Before long they discover that the seemingly peaceful town they’ve moved into is hiding a terrifyingly dark secret.
The film has a nice 70's horror vibe to it. However, the story and acting didn't do much for me. I've seen the story countless times before in films, so this one was not bringing anything new to the table to satisfy me. Highlights were the look of the "spirits" who reside in the house and seeing actress Lisa Marie on the screen. 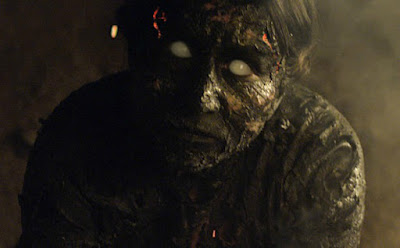 This night concluded my 2015 Cinetopia International Film Festival experience. I had a blast and look forward to attending it again in 2016. Here's to hoping I can free up my schedule to fit even more screenings in next year.