Day two of the 2015 Cinetopia International Film Festival found me at the Senate Theatre in Detroit for a screening of Dark Star: H.R. Giger's World. 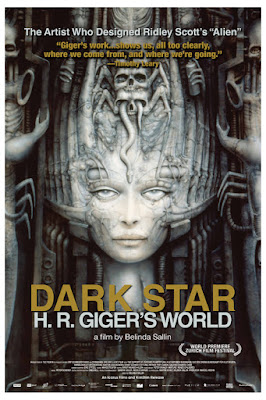 This was my first visit to the Senate Theatre and I was pleased. It's another renovated old theatre, much like the Redford Theatre. Both are home to the Detroit Theater Organ Society and there was indeed a organ player doing what he does best before the beginning of the film. He was actually the husband of the woman who served me at the very reasonably priced concession stand. I got a small popcorn, a pop, and a package of Goober's for the a grand total of only $5.00. It's a family affair at the Senate Theatre and they stay open with the help of volunteers and donations for renovations. They are non profit and a nice gem in the heart of my former neighborhood. 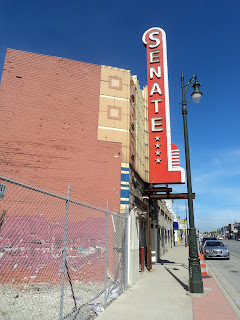 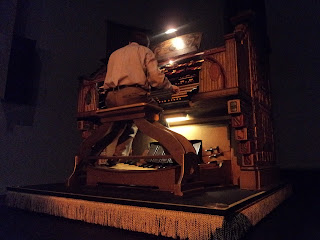 *SPOILER ALERT. I go into some detail in regards to scenes from the film. Proceed with caution.*
I was very much looking forward to this screening of Dark Star: H.R. Giger's World. I've been big fan of H.R. Giger's work for decades. The general public mostly knows H.R. Giger as the guy behind the creation of the Alien in Ridley Scott's classic film. Before and after Alien Giger has always been an artist. His art is often dark and is often depicting the subjects of birth, death and sex.
The documentary explores H.R. Giger's home in Zurich, Switzerland. The house is stunning with statues, art, and books piled high throughout his residence. Giger has so many books that he even utilizes a bathtub to house his collection. The place is a museum. Giger had a railway built in his backyard and a mini train that takes you through tunnels and doors that he designed. Giger himself rides the ghost train in the documentary and is one of those "WOW!" moments caught on film. The backyard is adorned with many sculptures that Giger has made over the years. 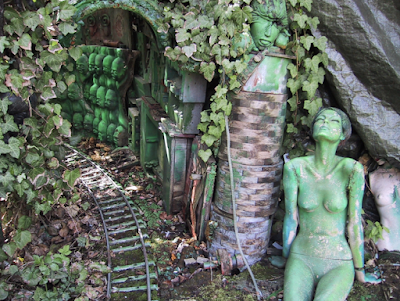 Giger pulls a human skull out of a glass case in a scene from the film and explains how he received the skull from his father when he was 6 years old. He admits he was frightened by it, but ended up pulling the skull around on a string to face his fears. Giger's nightmares and facing his fears is a major reason for all his macabre art output. His work is his therapy. 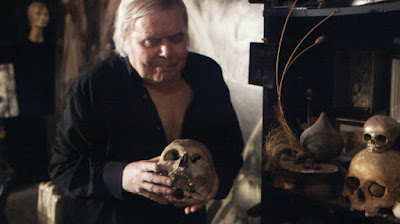 The film shows Giger with his circle of friends, loves, and business associates. Never a man who wanted a manger, he ends up in life having agents and helpers who are just as much his friends. He often enjoys dinners with them in the film and they help paint a portrait of Giger. One such person is Thomas Fischer from the band Celtic Frost. He act's as one of Gigers assistants. He explains how much Giger meant to him and his band as he was coming up. Giger himself chuckles at the fact and says the much younger Thomas Fischer had just as much influence over him. Giger's ex-lovers and ex-wife also have kind words to say about the man and he still has a relationship with many of them.
The modern day Giger in this documentary is in his early 70's and is lacking much physical strength. It was a shock to see him this way since I was so use to the younger Giger that I grew up with and saw in the archival footage of this film. He needs help to walk around. Luckily he has his second wife Carmen by his side. She is his saving grace in his later years in life. 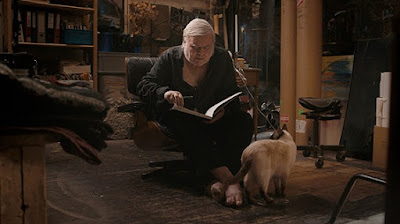 Giger reflects on his past in the film. At one point his wife is giving a tour Giger's artwork that adorns the house and H.R. chimes in to tell her to let the documentary filmers know that a specific piece was created when he was on a LSD trip. She does just that, and also notes that it wasn't very often that he created pieces under the influence of LSD. He chokes up when he discusses his model and life partner Li Tobler. She was his partner for 9 years before her life ended in suicide. Giger himself knows she suffered from depression, but also wonders if the bleakness and morbidity of his work added to her volatile situation.
Giger in his later years enjoys food, wine, his pet cat, and his living space that has furniture he designed and looks like something straight out of the film Alien. Seeing Giger at his chair and table is a reminder that he truly is a master of his craft and lives and breaths it. Giger is a workaholic and the film shows him still sketching when he has down time and left to his own devices 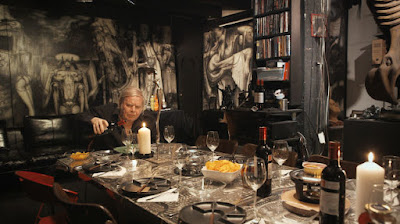 Giger is also shown meeting with the public at gallery openings as well as the opening of his own museum bar. Fans line up and show off their tattoos based on his artwork. Giger views them and fulfills reguests to sign their flesh. The H.R. Giger Museum bar was yet another dream that Giger always wanted and fullfilled.
As his wife Carmen explains, Giger would use any money they made and directly reinvest it in art, weather it be a sculpture for the backyard or a bar. They always had just enough to make it happen. 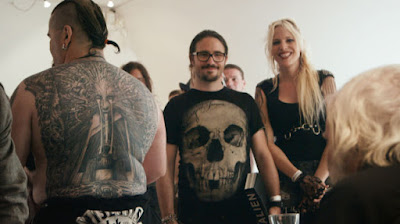 H.R. Giger passed away shortly after the filming of this film. The film represents his legacy well. From the vintage clips to the modern day old man who stayed true to his passion for his work till the very end. Giger is asked in the film about life after death. Giger says he doesn't believe in it and doesn't want to plow through life again. He says he got to see and do everything he wanted in life.
Visit the films website HERE.
Locally you can still catch the film at the Cinetopia Film Festival on Saturday, June 13 at the U of M Modern Languages Bldg Auditorium 4 in Ann Arbor at 9:30 PM.

The Cinetopia International Film Festival is running now till Sunday, June 14.
Visit cinetopiafestival.org for full film descriptions, trailers and dates/times/locations of all screenings and events.
Posted up by Casey on 9.6.15