REVIEW: Mayaeni, Benjamin Miles and Cold English at B One Ballroom June 13, 2015

I have seen David Allie emcee a couple different events and I think he even handed me a CD that he did a couple of years with Eddie Logix. The problem was whenever a gig came up to see Cold English, the band he fronts, I always had something else standing my way. This last Saturday for their show at B One Ballroom I was determined I’d see them play. The fact that David’s sister, Mayaeni, a terrific rock and blues artist along with hip hop artist, Benjamin Miles, were playing, made the show even more enticing. 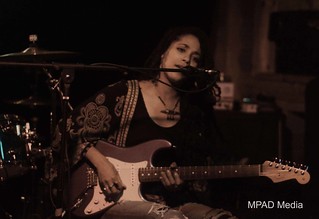 Mayaeni, who has played around the world, was using her set to show off some new tracks she’s been working on. It was a raw performance with just Mayaeni, her guitar and some percussion. Stripped to a lean essence, the set revealed Mayaeni’s knack for writing bold songs with strength and heart. She’s playing around town later this month, so look her up, you won’t be disappointed. 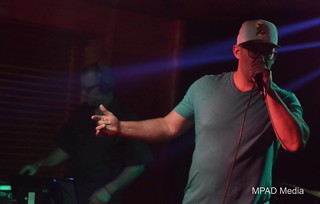 Benjamin Miles, a local hip hop artist took the stage next to play some tracks from his latest album “The Wishing Tree”.  On stage it was just a DJ and Benjamin but he did have a dubious guy begging him to play drums throughout the set. Benjamin’s songs have a unique appeal to them, combining hip hop beats with soulful melodies and a rap style that has its own groove. Everyone was playing it loose tonight and Benjamin was no exception as he ripped into a speedy, no-holds-barred rap that ended with him laughing and dropping the mic. 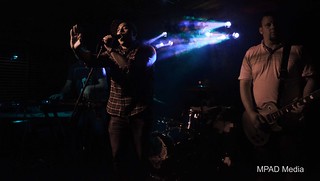 Cold English, who are known for their live shows, combine a raucous rock setting with a hip hop groove, courtesy of some of the area’s best musicians and David Allie’s powerful yet still smooth raps. David embraces the live setting and tries to get crowd involvement no matter the size or interest. By song two he had a good number of the crowd singing along and by song four he’d won the place over with fists in the air and smiles all around. Cold English is the real deal, while their sound reminds me of old school Rage Against the Machine, there is also more ska and funk put into their mix. Cold English's set left an impression with the crowd as they ended the set with their latest ep closer "Right Here, Right Now." 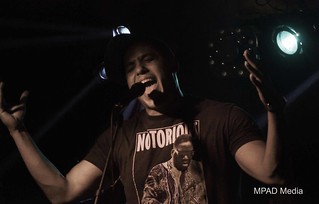