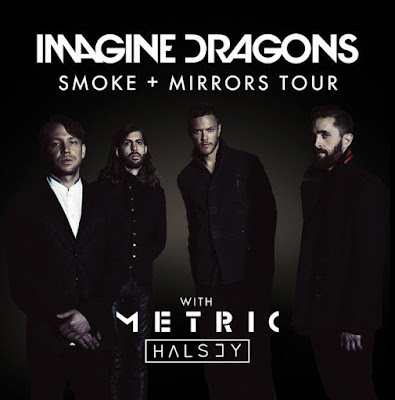 Grammy Award-winning rock band Imagine Dragons are bringing their electrifying live show back to the Detroit area this Tuesday, June 23rd. They will be playing the Palace Of Auburn Hills in support of their Smoke + Mirrors Tour and Album of the same name.

Opening the show will be alternative rock band Metric and Halsey.

Formed in 2009 and featuring lead vocalist Dan Reynolds, guitarist Wayne Sermon, bassist Ben McKee, and drummer Daniel Platzman, Imagine Dragons earned a grassroots following by independently releasing a series of EPs. After Alex Da Kid signed them to his KIDinaKORNER/Interscope label, the band made its major-label debut with the release of Continued Silence, a 2012 EP featuring the 2x platinum breakthrough single “It’s Time.”

Night Visions arrived later that year and Imagine Dragons found themselves on a skyward trajectory that saw the album debut at No. 2 on the Billboard Top 200 Albums chart, sell nearly four million copies worldwide, and became the No. 1 album on Spotify Worldwide for 2013. Night Visions’ second single, the 9x-platinum “Radioactive,” hit #1 on the Billboard Rock chart and earned the band a 2014 Grammy for “Best Rock Performance.” It is the best-selling rock song in U.S. digital history. The third single, “Demons,” hit #1 at Alternative and Top 40 radio, and has sold 3.9 million copies in the U.S. The band has sold more than 24 million tracks worldwide.

Artist Tim Cantor will have a exhibition set up inside the Palace for the show as well. Fans will be able to view the art that Cantor created for “Smoke + Mirrors” while listening to the songs in DTS’ innovative Headphone:X immersive surround sound. Cantor, who painted the album’s cover art, as well as pieces inspired by each song, will also be on hand at each venue to meet and discuss his creations with fans.

Tickets at $69.50 GA floor and reserved as well as $49.50, $34.50 and $29.50 reserved.
You can pick up tickets at Livenation.com, Palacenet.com, The Palace Ticket Store and all Ticketmaster locations. Tickets may be also charged by phone to American Express, Discover, Visa and MasterCard by calling 800.745.3000.