Day three of the 2015 Cinetopia International Film Festival found me at the Detroit Film Theatre for two screenings. First one up for the evening was the film Call Me Lucky. 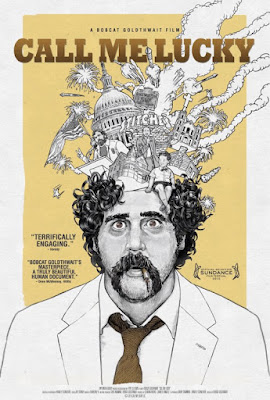 I was going into this one with no idea of who the subject Barry Crimmins was. I was leaving this in the hands of comedian Bobcat Goldthwait who directed Call Me Lucky. I'm a fan of Bobcat and his previous films so I knew this film had a good chance to be a winner. Plus, I'm always game for a documentary.
*SPOILER ALERT. I go into some detail in regards to scenes from the film. Proceed with caution.*

Barry Crimmins is widely known and respected in the underground as a stand up comic. But there's much more to Barry than being a comic and the film does a fantastic job of showing what it is. The first half of the film focuses on Barry's comedy. His humor on stage would often be political and that opened all kinds of incidents with spectators. Barry believes the country is messed up and he's not afraid to call out the mistakes he sees. The governments stupidity is a target he often has his sights on.

Barry ended up running his own club in Boston and these years solidified his cult status. Lot's of comedic talent and friends are interviewed including David Cross, Margaret Cho, Patton Oswalt, and Tom Kenny. Lot's of great stories and first impressions are shared. Bobcat Goldthwait says Barry is the reason he got sober at age 19 after a crazy night of alcohol and drugs. Barry himself is a big drinker, but handles it well. He's anti-cocaine and is quoted in the film saying "Friends are his drugs". 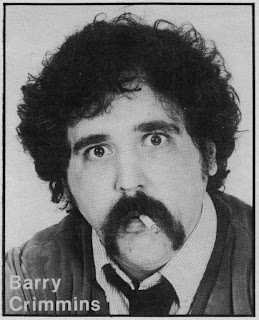 Barry was often angry even on stage delivering "comedy". Friends and colleagues noticed it and even his childhood friends growing up are interviewed speaking about how Barry would often be an angry guy. A lot of the reason why comes to light during the second half of the film. Barry was a victim of sexual abuse as a young child. A friend of his babysitter would repeatedly rape Barry. Barry's sister is interviewed about this and actually walked in on Barry and his molester in the family's basement. Barry re-visits the basement where these events took place in the film and it's a chilling scene.

This wasn't Barry's only encounter with child predators. He shares stories of a creepy priest at his local Catholic Church where he served as an altar boy. He would put his hand on Barry's shoulder and would verbally and emotional abuse him. This had a lasting effect on Barry. It later turns out that the priest was accused of molesting several children in the church and the church did nothing about it, besides transferring the priest around to other church's before his passing and the story hitting the Internet. Barry re-visits this church in the film and screams obscenities at it. To this day, Barry tweets the pop everyday asking to be excommunicated. Barry has no desire for religion in his life and is long over it.

At the advent of the Internet and  in the early 1990's, Barry discovered AOL chat rooms that were unwittingly hosting pedophiles who were exchanging images of child sex abuse. Barry alerted AOL and they did little or nothing about it. He began posing as a 12-year old boy and collecting images from the perverts who would flock to him online. Barry contacted local law enforcement with the information and evidence. This was new to them and they didn't know how to handle it at first. Eventually his work was part of a federal sweep of online child pornography websites. The first ever. It resulted in the arrest of hundreds of extremely active pedophiles and the establishment of a new police and FBI unit in Cleveland that focused exclusively on Internet sex crimes. Barry was also asked to testify before the U.S. Senate Judiciary Committee where he gave a AOL executive a piece of his mind. At one point the AOL executive actually said that AOL had a "three strikes, you're out" policy in regards to chat rooms. Barry quickly responded that he believed that these pedophiles should only get one strike.

Barry is a complex man. Barry is funny, beer loving, angry, driven, outspoken, friendly, bitter, and the list goes on...
Barry states in the film that he has two goals in life which are to overthrow the government of the United States and to close the Catholic Church. He has not reached either goal just yet so I think you'll be hearing a lot more from Barry Crimmins in the future. Start out my watching the film Call me Lucky and take it from there. 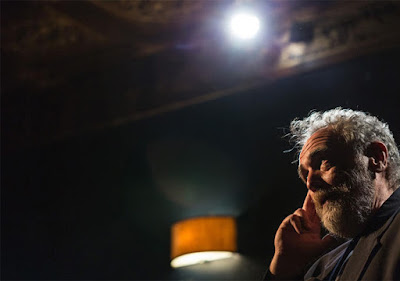 Clinton Trucks, producer of the film, was in the building this particular night and he introduced the film as well as participated in a Q&A session with the crowd after the film. He gave a little more insight into Barry's life since they could only cover so much in the film.
Visit the films website HERE.
Locally you can still catch the film at the Cinetopia Film Festival on Saturday, June 13 at the Michigan Theater in Ann Arbor at 7:45 PM and on Sunday, June 14 at the State Theatre in Ann Arbor.
The June 13 screening at the Michigan Theater will feature a live post-screening Q&A with Barry Crimmins (Comedian and Film Subject), Bobcat Goldthwait (Director), along with Clinton Trucks (producer).

The Cinetopia International Film Festival is running now till Sunday, June 14.
Visit cinetopiafestival.org for full film descriptions, trailers and dates/times/locations of all screenings and events.
Posted up by Casey on 10.6.15